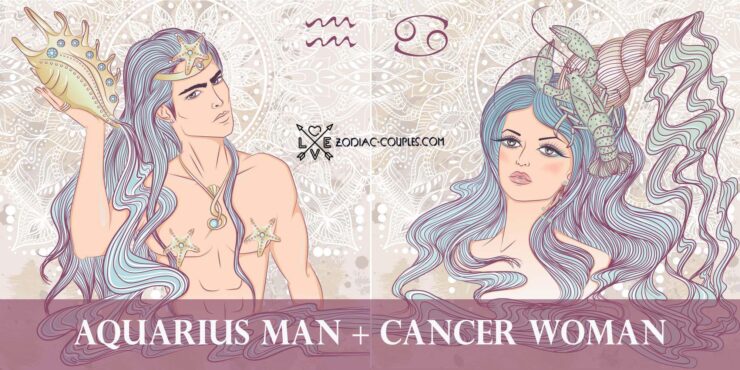 The union of an Aquarius man and a Cancer woman is difficult in terms of working on relationships. These zodiac signs have completely different ideas about love life.

Cancer merges with a partner and has a very close connection with him. A woman is looking for love, support, and constant attention. However, Aquarius man sees a relationship as a union of two independent individuals who just feel good together. He keeps his distance and can easily exist alone. A man is looking for a soul mate in his partner. A woman should be, first of all, his best friend.

An Aquarius man and a Cancer woman can be a strong couple if they can accept the unusual nature of their soulmate and care about them. Most likely, the Cancer lady will need to motivate and intellectually challenge Aquarius. In this case, they will not be bored with each other. Good relationships are daily work in this couple and they will definitely have to work hard.

Addison is Cancer, and Jeremy is Aquarius. The couple got married in 2019 after almost 11 years of dating. The year before the wedding, they welcomed their first baby. Now, they are expecting baby #2. Addison posts the cutest photos of their family on Instagram. It seems they are doing great.

Nancy was Cancer, and Ronald was Aquarius. The couple met in 1949. After a painful divorce with Jane Wyman, a Capricorn woman, Ronald didn’t want to get married again, but he proposed to Nancy after three years of dating. They had two mutual children, and Nancy became a stepmother for two of his children from a previous marriage.

Their relationship is considered to be intimate, loving, and beautiful. Romantic never died between these two. Nancy and Ronald were the support for each other and best friends. They used to write loving letters.

Sandra is Cancer, and Alexander is Aquarius. The couple got married in 2003 after three years of dating. In 2005 they filed for divorce, and that was their mutual decision. The divorce process lasted almost five years since they had issues with finance distribution. After the split up, the couple maintains their relationship as good friends.

Natalie was Cancer, and Robert is Aquarius. The couple married in 1957 after two years of dating, but they publicly announced their separation after five years. After that, Robert met Marion Marshall (a Gemini woman) who he married and had a daughter with. But Natalie was always on his mind and this marriage fell apart.

So, in 1972 Robert and Natalie got married again and lived together until Natalie’s death.

Her death is still considered mysterious since she drowned while on a yacht trip with her husband and friend. We do not undertake to judge whether her husband was to blame for this incident. In 1981, Natalie hastily passed away at the age of 43. The couple had one mutual daughter and one daughter from Natalie’s previous marriage. Despite her overwhelming success and demand in Hollywood, Natalie perfectly coped with mother and wife’s role.

After this loss, Robert was able to find love again, with a Leo woman.

Other Aquarius and Cancer celebrity couples

They were in a relationship for a long time before getting married. Mikhail did not believe in marriage, did not recognize its importance, and did not think that he would ever marry. However, Lisa became the woman for whom he compromised his principles, and in 2006 they got married. The couple has three children, and Mikhail has one child from a previous relationship.

The couple married in 1988 and had two children in the marriage. However, after six years, the partners decided to go their separate ways and divorced. They remained their friendship and continue to parent together.