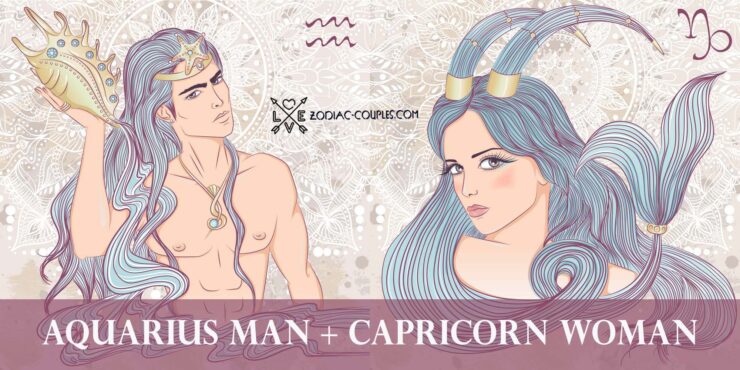 The Aquarius man and the Capricorn woman think and act in opposite ways due to their character traits. The woman keeps everything within limits and restrictions; she controls the man. On the contrary, the Aquarius man is freedom-loving. Capricorn woman is annoyed by his desire for freedom, and he is troubled by the framework that she has set for herself. Strangely, these contradictions can attract them to each other and affect and change the consciousness of partners.

By overcoming difficulties and disagreements, signs can build successful relationships. Capricorn woman feels younger and more ambitious with a partner, decides on new achievements, and finds original ways to achieve goals. Aquarius man is by nature very impractical, but thanks to the woman next to him, he will never be a failure. Aquarius tends to forget about basic things, thinking of goals. Capricorn will also help him achieve success rationally and without loss. The woman will take care of him, and he has a chance to become more serious.

Tom is Aquarius, and Jillie is Capricorn. They met in 1983 on the broadway show Cats and got married in 1987. It took them a lot of effort to build a trusting relationship, as she was constantly jealous and suspicious of her husband.

Tom did not choose between a career and a family, and with the arrival of their daughter, he took a break in his career, was engaged in her raising and with his ranch. Tom no longer led an active acting career, although it was not difficult for him to return to Hollywood’s former status. Family is the most important thing for him, and nothing has changed over the years. The secret of a couple’s long life together is in joint decision-making and support for each other. In their union, no one makes decisions alone and does not try to prove their supremacy.

Wayne is Aquarius, and Janet is Capricorn. The couple met in 1987 when, after charity events went to a Los Angeles Lakers’ game. They immediately felt the connection and the next year tied the knot. He proposed to Janet via the phone since she was out for work for six weeks, and after her arrival, he repeated his question in an appropriate atmosphere. The two managed to succeed in their family life and have five children together.

Carla is Capricorn, and Nicolas is Aquarius. They met in 2007 at a dinner party. The two tied the knot in 2008 and have one daughter together, they also have one son from her previous marriage and Nicolas has three children from previous relationships – he was married to a Scorpio woman before, but unfortunately, this marriage no longer worked for them.

Carla says that the secret of their marriage is luck because they are lucky enough to meet at the right time, to have four children before their relationship, and one daughter together.

In 2020, Nicholas was accused of corruption and called to be sentenced to 4 years in prison (two years incarcerated and another two years in prison suspended). The verdict is expected in March 2021. Karla supports her husband and asserts his innocence.

Christy is Capricorn, and Edward is Aquarius. The pair first met at the charity event, and their wedding was planned in 2001 but got postponed. The couple tied the knot in 2003. Christy says that the secret of their successful marriage is separate bathrooms, sounds interesting, but it is. They have two mutual children and dream of more new experiences together.

Charlie is Aquarius, and Natalia is Capricorn. These two kept their relationship a secret for a long time. They are Stranger Things co-stars. Their history started in 2016 when the couple started hanging out, and the public could only guess what was going on between them.

The pair confirmed the rumors of their relationship by walking down the street and holding their hands. The first red carpet debut was in 2017. Since that time, Charlie and Natalia shared many moments, photos on Instagram, and spent quality time. As Natalia says, the best part of their union is a supportive and understanding partner that overcomes the same obstacles in life and career that you do.

Dr. Dre is Aquarius, and Nicole is Capricorn. They met in the mid-1990s when Nicole was still married. However, her marriage lasted only four years. Dre waited for this moment, and in 1996 the two got married. They have two children together and four children from Dre’s previous marriages.

This union seemed strong and unbreakable. However, in 2020, Young filed for divorce. Their divorce will be difficult, and the process will not be fast since the couple did not have a marriage contract, which means Dre will lose a significant part of his fortune.