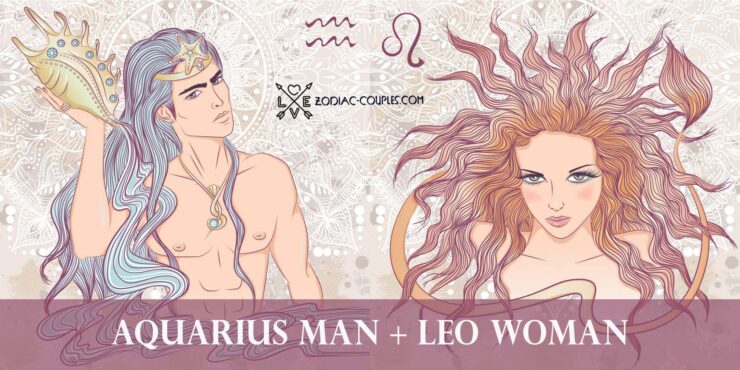 The meeting between a Leo woman and an Aquarius man cannot be called anything other than fateful. These signs’ lives are quite precisely divided into “before” and “after” and most often in a positive sense.

The signs have very similar temperaments, which could promise them full compatibility and similarity. Still, their goals are completely different; the approach to achieving goals is also. For a long time, you can watch how the signs are trying to achieve something together, but rather it will seem like chaos. In this case, the signs should do their own thing and properly distribute responsibilities.

Concerning love relationships, a happy ending is quite real. Leo and Aquarius’s love can be the most tender, so much so those around them will be moved by delight and emotion. One of them needs dedication and attention; the other can give it. The greatest value in such a relationship is that they can be themselves, so these signs are very comfortable together.

Kate is Leo, and Michael is Aquarius. The two met in 1995 in a touring production of The Seagull. They have a daughter together, born in 1999. The couple separated in 2002. Kate and Michael were never married. Beckinsale commented on the fact that she was embarrassed that Sheen didn’t want to propose but always felt like she was already married. Even decades after they split up, these two continue to love each other as personality and maintain a close friendly relationship.

Seth is Aquarius, and Clare is Leo. The couple met at the reopening of their favorite comic book store in 2007. This was exactly the case when a hobby brought them together. They tied the knot only four months after the engagement in 2010. Now the two work together as a team not only in the family but also on different projects.

Ashton is Aquarius, and Mila is Leo. The couple met in 1998 on the That 70’s Show, and it took them 14 years to start dating. After reconnection at the 69th Golden Globe Awards, they started dating in 2012. Two years later, Ashton and Mila got engaged, welcomed their first child, and in 2015 got married. The couple has two kids and is famous as one of the most loving and funny couples in Hollywood.

Ashton was married to Demi Moore before – the Scorpio lady.

Gabriel is Aquarius, and Jacinda is Leo. Gabriel married an Australian actress in 2004. During their marriage, they welcomed two children. In addition to their family life, the couple also worked together in such a project as Middle Man, and she also appeared in episodes of the Suits.

Silvia is Leo, Richard is Aquarius. The couple got married in 2004 and have three children together. These two are inseparable, and their love for each other knows no boundaries. Richard considers the most difficult marriage period when he had to leave for 3 months while working in Russia and Lithuania. The couple had never been apart for so long. He literally was going crazy without his family.

Burt was Aquarius, and Loni is Leo. The couple met in 1981 and the next year started dating. In 1988 the two got married and two years later adopted the son. The couple divorced in 1994 because Burt couldn’t maintain such a relationship anymore. It seems that from the very beginning, things went difficult for them. The only thing that Burt regretted before his death was the marriage with Loni Anderson. Their priorities were completely different, and it seems that she wasn’t created for this marriage.

Before Loni, from 1976 to 1980 Burt was dating Sally Field, a Scorpio woman, who he called later “the love of his life”.