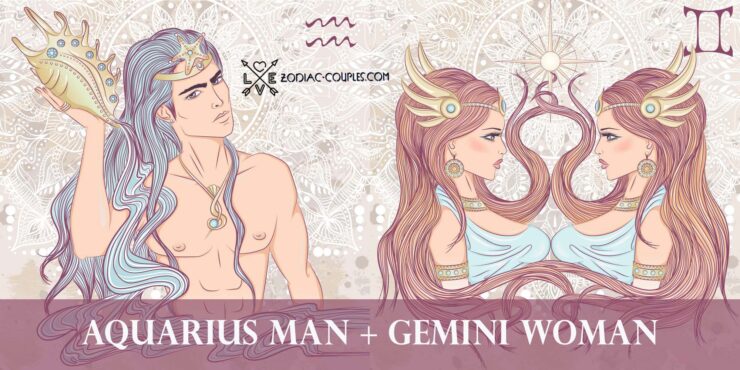 The relationship between a Gemini woman and an Aquarius man will be warm and tender. These signs have some special mental connection that positively affects the construction of their relationships and the family. This is the rare case when, in addition to romance, a strong friendship is built in a couple.

The connection between these signs cannot be called boring. What usually destroys couples, in their case, only strengthens. Conflicts and quarrels between Aquarius and Gemini are exactly the binders that help them grow, develop, and solve their problems. So in their case, the mechanism works, and the problems are eliminated. They never stand still, constantly move forward, set new goals, hate conservatism, and strive for new things.

The secret of their long relationship is in understanding each other, and this is something that no one else succeeds in their case. They can forgive each other, even the most serious mistakes, but they can even separate because of a trifle. Their connection is something so mysterious that even they cannot figure it out.

Dixie was Gemini, and Hal is Aquarius. The couple met in 1980 on the set of the television film The Killing of Randy Webster and got married four years later in 1984. They made a long way together of a 26-year marriage and were separated by Dixie’s death in 2010. They had no children together. Hal is still alive but never married again.

Taylor is Aquarius, and Marie is Gemini. The pair met in 2013 on the Tracers set, and that same year started dating. They were dating in the public eye, and paparazzi often caught them on the night dinners. The two announced their separation in 2015, but according to their surroundings, that was a mutual decision, and the couple stayed in a good friendly relationship.

Chris is Aquarius, and Malaak is Gemini. The couple got married in 1996. He is a stand-up comedian, and she is a businesswoman. Chris and Malaak have two daughters together. The two filed for divorce in 2014, and in 2016 it was finalized. Rock confessed his infidelity and pornography addiction in their marriage.