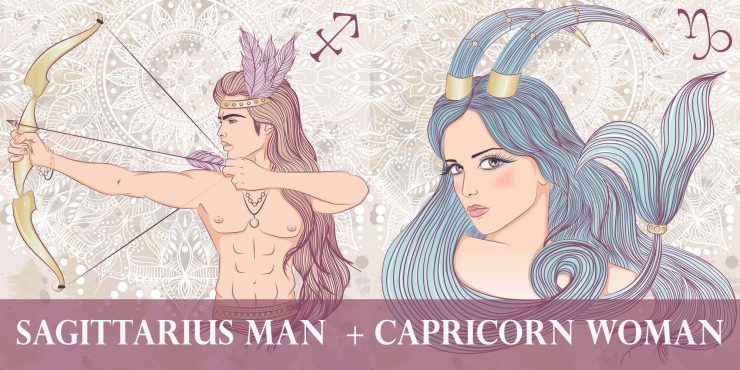 The Sagittarius man is an active, positive leader. An interesting storyteller knows how to captivate people. Versatile, purposeful, outspoken, straightforward. The Capricorn woman is proud, practical, purposeful. Loyal, responsible, erudite, interesting conversationalist, and devoted friend. The fire of the Sagittarius man can blaze as much as necessary on the Earth of the Capricorn woman – she knows how to pacify his ardor, establish the invisible boundaries of what is permitted. In happy unions of a couple, it is the woman who becomes the unspoken leader who knows how to guide her man with wisdom and patience. They are different, in many ways opposite, but love and destiny create bizarre and strong couples from representatives of these signs.

In a long, honest relationship, Capricorn and Sagittarius will make each other stronger and more successful. Once they can find balance in conflicting relationships, they will be ready to cope with any external problems and enemies.

For the well-being of relationships, Sagittarius and Capricorn must have similar concepts of morality, family values.

Although the marriage of a man Sagittarius and female Capricorn can last long and happy enough for many years, the “war of the worlds” in such an alliance is inevitable.

Tom is Sagittarius and Sienna is Capricorn. They started dating in 2011 soon after she ended her romance with Jude Law. In 2012 they got engaged and later this year their daughter was born. Nevertheless, in 2015 they split, but it was told to the press that they still love each other. It seems to be true, because they keep co-parenting and hang out together.

Kate is Capricorn and Jamie is Sagittarius. They were set up by mutual friend in 2007 after Kate ended her troubled relationship with Pete Doherty. In 2011 they have married. But in 2015 they split. It was assumed in a press that Kate felt jealous about Jamie’s female friends. In 2016 when divorce process wasn’t started yet, Kate started dating Count Nikolai von Bismarck and allegedly, Jamie was furious about that. So the divorce wasn’t easy.

But in the end, they seem to be friends now, because of how the act when they meet. Besides, they have common friends and this could sand off the rough edges.

Frank was Sagittarius and Ava was Capricorn. They met first in 1943 but it was just acquaintance, later in 1948 when Frank was married they met again and that’s when their love affair started.

Both of them were huge celebrities back then and frankly they still are. But nevertheless their affair was private until 1950 when they gone public. In 1951 Sinatra got divorced and he married Ava. It was a toxic marriage where jealousy, drinking and arguing prevailed. In 1954 Gardner filed for divorce, but Sinatra tried to win back her love until 1957 when he finally granted it. It seems that they both were crushed with this split.

Later, Franks found a Pisces lady with whom he spent the rest of his days.

Sissy is Capricorn and Jack is Sagittarius. They met when they were young, it happened on the filming set in 1972 and it was mutual attraction. In 1974 they got married. In 1981 they moved to the country and raised their 2 daughters there. And this marriage is still strong till today.

They say their secret is shared passion to movie-making, mutual support and ability to work side-by-side.

Ian is Sagittarius, and Nina is Capricorn. The couple began dating around 2010, but they only publicly opened their relationship in 2012, trying to keep them secret as long as possible. The couple introduced each other to their parents, adopted cats and dogs. However, in 2013, the couple broke up. Their union was the love of the Vampire Diaries‘ public and fans, and for the young viewers, their separation came as a shock. However, there was no drama. The partners just changed and realized that they were moving in different directions. They managed to remain good friends, and Nina is close squads with the current wife of Ian.

Other Capricorn and Sagittarius famous couples