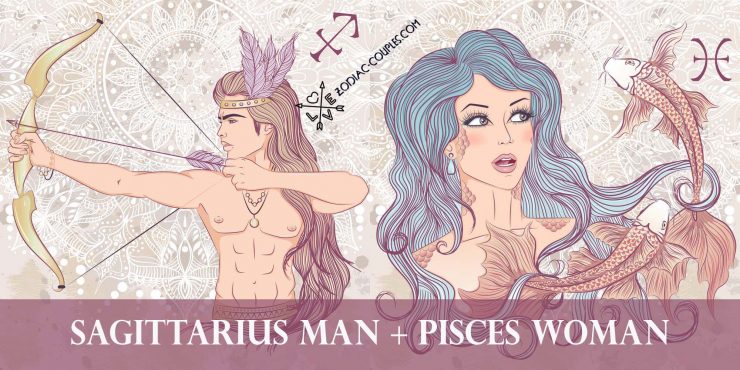 The romantic union of a Pisces woman and a Sagittarius man can develop in different ways. Much depends on what kind of people they are: how confident they are, how satisfied with themselves, whether their views coincide and, of course, how strong their feelings are.

The representatives of Water and Fire often find the characteristic qualities they lack in a partner, thanks to which they complement each other. Pisces, feeling the support of the Sagittarius man, will become more daring and realistic, and Sagittarius will gradually learn restraint and tact, seeing the gentleness, tolerance, and care of his beloved Pisces lady.

Sagittarius men are friendly. They are interested in a lot of what is happening around them. Pisces females, on the other hand, are ready to go headlong into feelings and are not at all interested in anything except their love. Against this background, the first offenses are possible. Pisces will not like either Sagittarius’s lightheadedness or his extroversion. They would like to see their beloved man always nearby.

Both partners need to show condescension to each other’s personality traits. After all, mutual reproaches cannot change nature, and it is quite possible to achieve a compromise and a desire to correspond to each other if you learn to trust and speak heart to heart. Not all couples succeed due to the ambition of Sagittarius and the caution of Pisces.

Barbara was Pisces, and Frank was Sagittarius. They first met in a casino where she worked, but it was just a moment. Later they were living in the same area and were in close circles, so by 1973, when Barbara was still not divorced, they already were spending time together. In 1976 they got married – he was 60 and she was 49. It was the last marriage for both of them (earlier, Frank was married to Ava Gardner – striking Capricorn lady).

Together they spent cozy domestic life, did charity, she described Frank as very romantic, and when he died in 1998, her grief was lifelong.

Bo is Sagittarius, and Catherine is Pisces. They have met on the movie set in 1988 and when it was ready he asked her out. They were dating for some time and later she moved to L.A. for him. In 1992 they tied a knot. Bo and Catherine have two sons.

Ray is Sagittarius, and Anna is Pisces. They met in 1983 when they both worked in a bank, but he asked her out only after he didn’t work there anymore. In 1987 they got married. It’s when he decided to be a full-time comedian, and his career started to rise.

They have four children together and say that their secret to a happy marriage is that Anna brings a balance of “being normal” to his celebrity life.

Other famous Sagittarius and Pisces couples