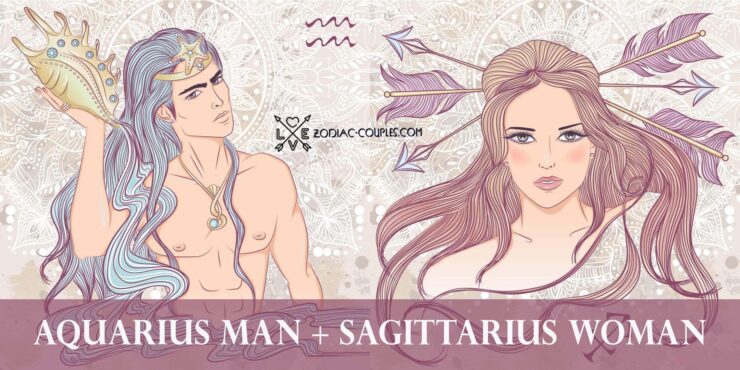 The relationship between an Aquarius man and a Sagittarius woman is a union of two independent, freedom-loving people who value personal space. It seems the generally accepted prejudices do not constrain them. Partners are always interested in each other. They can talk for hours, do something spontaneous, or find a common hobby. Everyone has what they are looking for in a relationship. It is important for Sagittarius that her partner accepts her views on life and does not condemn her position. Aquarius man protects his personal space.

They are two dynamic personalities who love change and new experiences. Usually, their relationship begins with friendship when partners have time to understand each other better. These zodiac signs appreciate the family’s feelings in the union since they like fidelity and acceptance. They cannot avoid conflicts. Aquarius and Sagittarius are two emotional and hot-tempered signs who rarely resolve an issue without raising their voice. They will argue on any occasion, trying to prove their case.

In a long-term relationship, partners will have to adapt to responsibility, a person nearby, and new obligations. They will rebuild their communication. There is a lot of personal work to be done to develop relationships and not standstill. If partners do not accept each other and do not compromise, they part.

Tina is Sagittarius, and Erwin is Aquarius. They met in 1986 when she flew to London, and Erwin was sent to meet her. Tina immediately felt the excitement and realized that it was love at first sight. She was 47, and he was 30. Their relationship began with friendship, and they started dating a year later. Erwin proposed to Tina 3 years after they met, but she turned him down because she doubted his sincerity. They got married many years later, in 2013.

Years later, Tina had to fight intestinal cancer, and she won, but the treatment gave complications to the kidneys. She didn’t want dialysis and wanted to give up life, but her husband gave her his kidney. Partners are still in love as newlyweds and cannot imagine their life without each other.

Katherine is Sagittarius, and Josh is Aquarius. The couple first met during the filming of Josh’s video for the song Only You in 2005, where Heigl took part. It took them a year to get engaged, and Josh wrote a song for her. In 2007, they got married. The couple has three children, two of whom are adopted. Their marriage is not something ideal because the partners had to work hard to build communication. They worked hard on the relationship, adoption, and discussed even the most unpleasant topics to come to what they have now.

Krysten is Sagittarius, and Adam is Aquarius. The couple met in 2014 at one of the concerts of his group. Kristen was a fan, and she attended his concerts, and then she got in touch with Adam, and it all started. The same year, in the summer, they were already seen as a couple. They don’t like to talk about their personal lives and leave everything behind closed doors. However, in 2019, they welcomed their first child and now often go for a walk in a close family circle. The partners are not married.

Jennifer is Sagittarius, and Michael is Aquarius. The two met on the set of the TV series Dexter and began dating in 2007. In 2008, the couple disappeared on New Year’s Eve and announced themselves a month later, already married. Unfortunately, their marriage did not last long. In 2010, they announced a divorce, which was finalized in 2011. They talked about their separation more than a relationship. It was suspected that the reason for their separation was a partner on the set and best friend of Michael, but this is not true. The partners made a mutual decision to separate peacefully, citing irreconcilable differences. They continued to work together on the project as real professionals and remained good friends.

Jane is Sagittarius, and Roger was Aquarius. The first meeting of partners did not lead to anything and left an unpleasant aftertaste. However, that all changed when, three years later, he came to her party in 1963. They had a great time and were fascinated by each other. At that time, Jane understood that he was not reliable, but something attracted her to him. They started dating, and he became her mentor in everything. They traveled, he showed her the world. So during a trip to the United States in 1965, the couple decided to get married suddenly. It was a spontaneous decision, and they didn’t even have rings.

She was young and did not notice many things. Later she discovered her husband’s gambling addiction. He did not spend the night at home or brought prostitutes home, manipulated her, spent her savings. It seemed to her that the child could save the situation because he is a good father. She gave birth, but nothing has changed. It seemed that the whole world around had ceased to exist, and there was only him. Their separation took place in 1970, and the official divorce in 1973. Later, in his memoirs, he called her a deceitful and traitor and himself a faithful and caring husband.