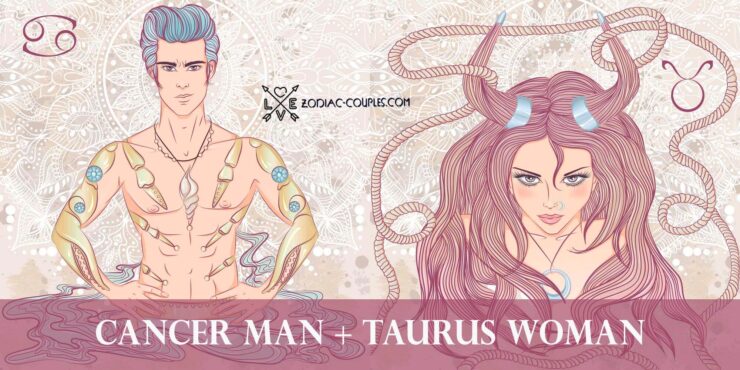 The union of a Cancer man and a Taurus woman has every chance of a long and happy existence. The zodiac signs belong to the elements of water and earth, which certainly complement each other. Partners have many points of contact, and not only in love relationships but also in business, family, hobbies, and communication with others. Their meeting can be considered fateful since the zodiac signs immediately understand that they have found everything they need.

The Cancer man and the Taurus woman are both absolutely non-conflict people, so their relationship will be calm. They like to surround themselves with balanced people who will not disturb their inner peace. A woman in a relationship will give a man tenderness, loyalty, care, and, of course, love. She senses his mood and indulges his whims. A man in a relationship is responsible for emotions, prompting only bright feelings in her.

Both zodiac signs prefer to resolve conflicts through long talks and negotiations. They always try to get to the bottom of the truth without unnecessary emotions and come to compromises.

Megan is Taurus, and Brian is Cancer. The couple met in 2004 at Hope & Faith. Megan was then only 18 years old, which could not but alert Brian. He was afraid of the age difference, but she took the initiative into her own hands, which he did not regret. They began dating, and after two years of hidden relationship, the couple got engaged in 2006. The partners tied the knot in 2010. After their second son’s birth, the couple broke up, and Megan filed for divorce demanding joint custody, but she later withdrew the divorce. The reason was her pregnancy with their third child, and the couple was reunited. In 2019, they broke up again. Half a year later, Megan appeared on the red carpet with her new boyfriend and three days later filed for divorce from her husband. Brian was very upset about parting and hoped that they would be able to make up.

Gal is Taurus, and Yaron is Cancer. The couple met in 2006 at a party in the Israeli desert. This was the beginning of their romance. In 2008, Yaron made Gal a proposal, the details of which they decided to leave only for the two of them, and in the fall of the same year, the couple tied the knot. They traveled a lot together from Israel to the United States. The couple has two children in marriage, and in 2021 they announced that they were expecting a third child. Lockdown 2020 had a positive impact on their relationship. They spent a lot of time with their family and enjoyed it. The couple seems to be doing great and very happy.

Adrianne is Taurus, and Scott is Cancer. In 2017, the partners starred together in The Orville. The couple announced their engagement on Twitter in 2019, and they looked insanely happy. They did not drag out for time and got married four months later. The partners shared this bright event on social networks, but two months later, clouds thickened over them, and Adrianne filed for divorce. There were ups and downs in their relationship, but she decided to withdraw the divorce petition in the end. The reunion did not last long, and in 2020 she again filed for divorce, and this time the decision was final.

Julie is Taurus, and Rich is Cancer. The partners got engaged in 2011 and got married in 2012. It is believed that they dated for about four years before the wedding, which suggests that the relationship between the two began after Julie’s divorce from her ex-husband. The union has no common children yet. The duo enjoys family life. They have never been involved in scandals, have not been criticized for infidelities, and do not discuss their personal life in public. They seem to have a calm and happy family.

Tobey is Cancer, and Jennifer is Taurus. The two met in 2003 and started dating. Their relationship lasted four years when in 2007, the partners decided to tie the knot in an intimate ceremony in the circle of the closest ones. At a certain point, the partners realized that they had nothing in common, and their views on life and interests were different. In 2016, they announced the separation. The couple has two children, so they did their best to ensure that divorce does not negatively affect them. However, Jennifer officially filed for divorce only in 2020. They are great at raising children and remain good friends.

Barbra is Taurus, and James is Cancer. The couple met in 1996 on a blind date. For James, it became love at first sight. It took them two years to decide on a wedding, and then in 1998, they tied the knot. The couple has no children together, but James became the stepfather for Barbra’s only child from her first marriage. Their union is over 20 years old, and they are still in love. The secret to a long and happy marriage for a couple is the ability to take the blows of fate and deal with them together.