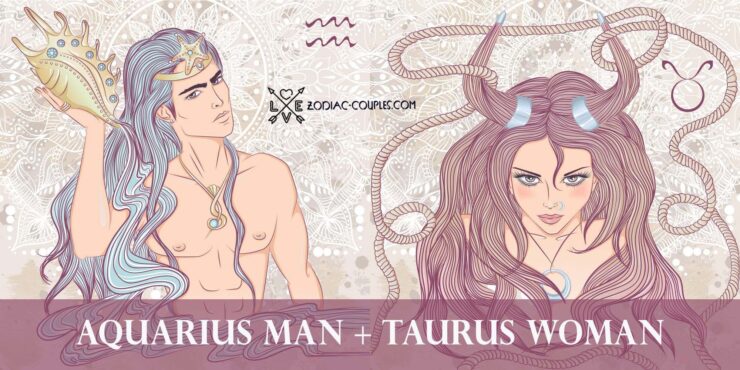 Aquarius man and Taurus woman in the union can perfectly complement each other. A man is a dreamer searching for new sensations, while a woman is more stable and serious. This type of relationship will help both zodiac signs learn something from their partner, adopt certain qualities. The Taurus woman will become more relaxed, and the Aquarius man will start thinking “about the earthly matters” more often.

However, a positive outcome in this relationship is possible only with a wise approach and partners’ desire to change and learn something new. Otherwise, the Taurus woman will be constantly irritated by the frivolity and “hovering in the clouds” of the Aquarius man. In turn, he will feel a constant lack of lightness, novelty, and emotions.

Cate is Taurus, and Andrew is Aquarius. They met on a TV show set in 1996. It is known that Andrew proposed to Cate after 21 days of dating. The couple got married in 1997. Since that time, they’ve got a huge family of 4 children (3 of them biological and 1 adopted in 2015). They’ve been together for 23 years and adore spending their time with family at home in pajamas.

Jordana is Taurus, and Andrew is Aquarius. The couple met on The Texas Chainsaw Massacre: The Beginning set in 2005 and tied the knot in 2007. Unfortunately, in 2020 Jordana filed for divorce. They continue to be good parents for their two sons.

James is Aquarius, and Poppy is Taurus. The couple became engaged in 2012, and in 2014 they got married. James and Poppy are a pretty young and happy couple. Poppy devotes a lot of time to her career, but their Instagram accounts show that their feelings have not faded a bit over the years. Their congratulations to each other are always the sweetest.

Mary Elizabeth is Taurus, and Charlie is Aquarius. The couple met in 2001, and in 2006, after two years of relationship, they got married. They have one child in marriage. The secret of a happy couple’s relationship is that they constantly work together, and the characters of the series they play help them solve their relationship problems.

Ed is Aquarius, and Cherry is Taurus. The young couple had known each other since high school. Still, their reunion happened during Ed’s worldwide popularity. They got married in 2019 in a super-secret ceremony for those closest to them. In September 2020, the news thundered with the birth of the singer’s first daughter. Ed himself is on cloud nine.

Ayda is Taurus, and Robbie is Aquarius. This couple is considered one of the strongest in show business. They started dating in 2006, and they got married in 2010. Ayda and Robbie have four wonderful children. Ayda recalls how she had to sacrifice her career at the very beginning of the relationship, but Robbie promised that he would always take care of her and their future children. Ten years of marriage, and Robbie, like a real man, continues to keep his word.