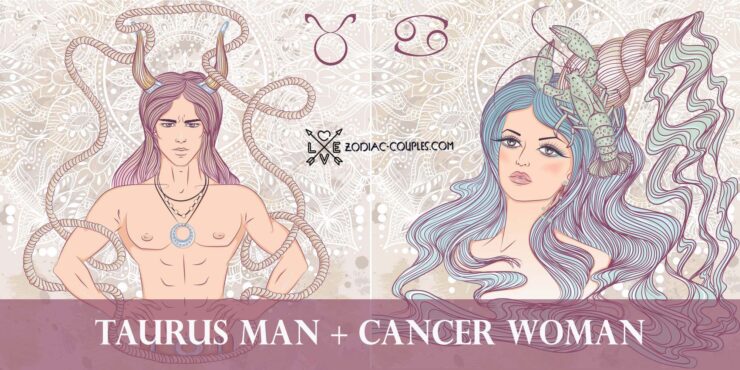 The Taurus man and the Cancer woman have excellent compatibility for family life. Their relationship will develop very naturally and at the pace that is right for them. These zodiac signs are united by the desire to spend time at home, create comfort, be with family, and do ordinary things. They get real pleasure from this. Taurus is reliable, strong, and loyal. Cancer woman is the most caring, gentle, and kind for her man.

A Taurus man does not like to take risks, which can sometimes upset a lady, but she endows a man with the courage to new exploits and achievements with her feminine wisdom. A man will often have to be patient with a woman, as she is not stable and very emotional. It will be difficult for him to keep track of her mood changes, but he will also get used to this.

Partners approach creating a family very responsibly and marry when they are confident in their partner. In family ties, these zodiac signs act differently. They become calmer and more rational. Their marriage is very harmonious. By this time, they had learned to listen and hear each other, respect, set common goals and determine their views on life. Usually, if they decide to go their separate ways, they maintain a close friendship.

Jack is Taurus, and Anjelica is Cancer. They met in 1973 when Anjelica was at his birthday party at his house. They danced all night, and this is how their relationship began.

However, in 1980, Huston decided to move from him and bought her own house. She wanted to achieve success herself, without men’s participation, and six years later, she won an Oscar. Nicholson never stopped talking about how good he was with her, how proud and loved he was. However, this did not prevent him from constantly cheating and talking openly about it. Anjelica found other women’s clothes and jewelry at home, but they broke up after Nicholson admitted that one mistress got pregnant.

Jeffrey is Taurus, and Hilarie is Cancer. Around 2009, they were introduced by a mutual friend and colleague of Jeffrey from Supernatural – Jensen Ackles. At first glance, Morgan attracted Hilarie with his self-confidence, and he could not forget her. Their relationship developed rapidly, and in just a couple of months, they were already expecting their first child, who was born in 2010. They have two children together, and they got married in 2019. They still love each other, and Jeffrey’s confidence proved to be infectious and helped Hilarie in her development.

Ahmet is Taurus, and Selma is Cancer. The couple met in 2002 and began dating, after which their relationship developed rapidly. Ahmet proposed to Selma in 2003, and they got married just three months later. The partners did not have children together. In 2006, she filed for divorce, which was finalized at the end of the year, citing irreconcilable differences. However, they claimed that their love was still alive so that they would remain close friends.

Royston is Taurus, and Liv is Cancer. The two started dating in 1998 and were engaged in 2001. Their relationship developed in stages. A year later, they got married and, in 2004, welcomed their common child. However, already in 2008, the couple confirmed their separation. Initially, Liv did not comment on their parting in any way, but later she said she had to go through a couple of tough years. She took a break from work to come to her thoughts, to come to terms with a single mother’s role, and take care of her son.