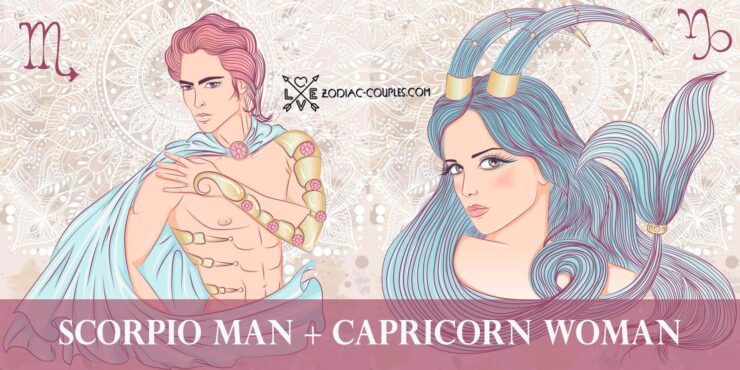 The Scorpio man and the Capricorn woman make up a very multifaceted union. However, partners will have to overcome difficulties on their way and overcome trials to become a full-fledged couple. The Capricorn woman belongs to the elements of the earth, which speaks of her determination and perseverance. It does not matter whether she is destined to receive something. If she wants, then she will achieve everything she wants. Neither objective incompatibility with a partner nor his bad character will stop her. The Scorpio man belongs to the water element, which speaks of his vivid ambitions and desire to maintain a relationship at any cost.

Both zodiac signs are far from romance. Their wants and needs in a relationship are pretty simple: support, understanding, and emotional closeness. Partners can positively influence each other. They evoke the best qualities and drown out the worst ones. Both partners are very loyal, and the main thing for them is negotiating and making concessions.

Mads is Scorpio, and Hanne is Capricorn. The couple’s first meeting was very unusual, as Mads was dressed as a woman for La Cage Aux Folles. Apparently, Hanne was not embarrassed because, in 1987, they started dating. Partners show their self-worth to each other by mentioning that they are in relationships with the most beautiful person on the planet. In 2000, the two tied the knot and started a family. The union has two children, and now they happily live in Denmark and often spend time in Majorca.

Kate is Capricorn, and Michael is Scorpio. The couple met in 2011 while filming Big Sur, where he directed. Kate and Michael did not wait long, and a year later, they announced their engagement in August 2012. A year later, the union tied the knot. The couple does not have children together in marriage; however, Michael has a daughter from a previous relationship. Kate had to establish a bond with his daughter, and she did it perfectly. Although she doesn’t have children of her own, she experienced motherhood as a stepmother and seems to enjoy it.

Fran is Capricorn, and Peter is Scorpio. The couple met while Peter was working on post-production for his low-budget film Bad Taste. The couple got married in 1987, and then not only their family life began, but they also started actively working in a professional sense. Fran is a screenwriter, and she often wrote scripts for Peter’s films. However, they did not go headlong into their careers but expanded the family. The couple greeted two children.

Chloe is Capricorn, and Adam is Scorpio. The two met in 2014 on the set of The Final Girls. Then in February 2015, the two started dating. This funny couple loves to share photos on social networks. Four years later, the couple got engaged in 2019, and they are now actively planning a wedding, which is likely to be postponed due to the pandemic. Adam shared that the secret of their relationship is his lighthearted attitude towards conflict. During fights, he uses humor to defuse the situation, and this always works for these two.

Other Scorpio and Capricorn famous couples