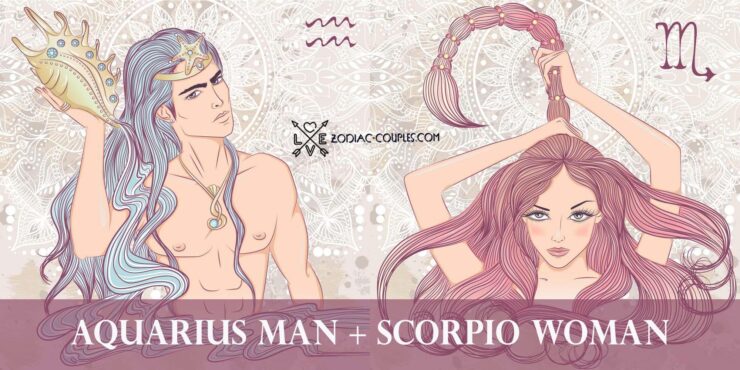 The Aquarius man and the Scorpio woman have similar temperaments, but their relationship cannot be ideal. Aquarius is innovative, and Scorpio is conservative. A strong and harmonious union of partners is possible, provided that they are both psychologically mature people and are ready to accept each other as they are.

In this couple’s compatibility, the Scorpio female’s wisdom plays a huge role, allowing Aquarius to feel his leadership and think that it was he who conquered her. In fact, the woman thinks out and acts much more in their relationship. Scorpio woman will be annoyed by the frivolity of Aquarius man since she does not intend to waste time on frivolous relationships but plans a family and children.

These zodiac signs should learn to discuss with each other all the unpleasant moments in a relationship. Both a man and a woman are very hot-tempered in their characters, and every little thing can make them mad. Suppose partners do not learn to solve these problems wisely. In that case, constant scandals and showdowns of relationships will be followed by separation.

Jerry is Aquarius, and Rebecca is Scorpio. The couple started dating in 2004 and the next year got engaged. Their wedding took place in 2007 at their ranch in Calabasas, California. They have twin children born the next year after the wedding ceremony. Jerry jokes that the secret of their long and happy relationship and marriage is in their twins and many animals at home since no one wants to leave them.

Demi is Scorpio, and Ashton is Aquarius. The two met in 2003 and tied the knot in 2005. There is a 16-year age gap between these two. Demi Moore filed for divorce in 2011, and as it later revealed, there was more than one reason for such a decision.

Sometimes after the divorce, Demi Moore began to comment on their life together and the reasons that served to separate them. There were things in their marriage that were contrary to her values, and in the end, she chose herself and her life and just continued to move on, but without him. During their marriage, she had to endure a miscarriage, which also affected her. Demi Moore hasn’t been drinking for about 20 years, and she claims Ashton often tempted her to drink.

Another mistake in their relationship was that they let a “third party” into their bedroom. She wanted to show herself very active and cheerful, which erased the clear boundary in their relationship and served as a possible reason for Ashton’s unfaithfulness to Demi. She never felt completely happy with him, and she constantly had to struggle with herself, her beliefs, and values.

Ashton was able to find a woman who is happy with him – Mila Kunis, a Leo lady.

Julia is Scorpio, and Daniel is Aquarius. The couple met in 2000 on the set of The Mexican where she starred, and he was a cameraman. They got married two years later in 2002 at a private ceremony with the family and friend at her ranch in Taos, New Mexico. The two try their best to keep their personal life quiet, and the photos of these two are sporadic, although, on their 18th anniversary, she broke the rule showing how happy they are to be together for such a long time posting a photo on her Instagram.

Abhishek is Aquarius, and Aishwarya is Scorpio. They are one of the most famous couples in Bollywood. Abhishek Bachchan fell in love with Aishwarya on the set of Dhoom 2. Their engagement was announced in 2007, and the two tied the knot that same year. The couple has one daughter Aaradhya together. According to Aishwarya, they are both stubborn and powerful personalities, so they often have disagreements, but this does not have a negative impact on their relationship but gives only that essential spark.

Christopher is Aquarius, and Jamie is Scorpio. Curtis saw Guest for the first time in a Rolling Stone magazine. It is unbelievable that five months later, in 1984, the couple tied the knot. In their marriage, they adopted two children. In interviews, Jamie associates her husband with the word “perfect,” since, in her mind, he is the perfect husband, father, sportsman. Once, she told, that the secret of their long marriage is just “don’t get divorced.” Bad days happen, but we can cope with them and work instead of leaving.

Chris is Aquarius, and Ellen is Scorpio. They met while doing their grocery shopping in 2003 and secretly got married in 2007. The couple has three children together. On those rare occasions when Ellen talked about marriage, she said that they love to spend time at home together and sometimes go on dates, and since they both go to bed early, they dine somewhere. The secret of their happy union is not to try to change a person. Since everything is fine with a partner, accept him as he is.