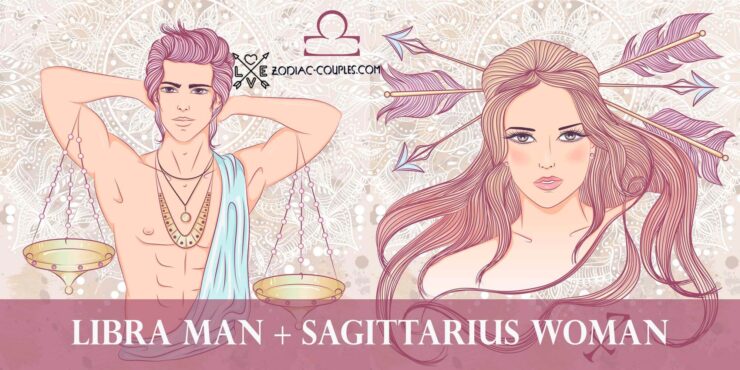 The union of a Libra man and a Sagittarius woman is rare. Still, if the partners decide to be together, it will be easy for them to build a relationship and establish a connection. These signs of the zodiac belong to the elements of fire and air and complement each other perfectly. They always find common topics. Their characters are somewhat similar, and the differences only attract them since these zodiac signs see this as an opportunity for personal development and learning new things.

Their relationship will be bright and passionate. Both partners are not inclined to focus on problems and blame the partner for this, which positively affects their union and allows them to grow as a couple. However, conflicts can arise due to differences in temperaments. The Sagittarius woman is very bright, active, and cheerful, so the man will try to calm her down in society. A woman does not tolerate criticism and perceives it very painfully. A man needs to learn to smooth out corners in communication and avoid sharp words and expressions.

Hugh is Libra, and Deborra-Lee is Sagittarius. The couple met in 1995 on the set of the TV series Correlli. At that time, Jackman was starting his career, and Deborra fell in love with him at first sight. He turned out to be lucky since almost the entire filming group was in love with her, but she chose him. Their romance was a secret, and 11 months later, the couple got married in 1996. They wanted to expand their family but faced miscarriages and failed IVF. As a result, the couple adopted two children and became absolutely happy. Deborra is 13 years older than her husband, but love has erased the boundaries of age.

Ian is Libra, and Gwen is Sagittarius. The partners met on the set of the romantic comedy Cheaper to Keep Her, and this completely turned their lives upside down. The meeting was love at first sight, and soon the couple began dating. At the time, Ian was already divorced twice and had two children from a previous marriage. Ian and Gwen got married in 1980. He says that Gwen is the only woman he loved in his life, and previous marriages and relationships were erased from his memory. There is such a strong bond between partners that it seems they have known each other for ages. Ian keeps in touch with the children and visits them. In a 40-year marriage with Gwen, they had no children.

Jane is Sagittarius, and Bradley is Libra. The partners got married in August 1992. They seemed like the perfect happy couple in love. The union welcomed three children and lived in Los Angeles until they announced their divorce in 2009. At first, Jane stopped appearing with her husband at charity events and awards ceremonies. Later it turned out that the couple was going through the separation process. The partners equally divided all property and finances, as well as child custody. It was a very difficult time for Jane to face the separation of her husband. She was often seen as sad and depressed. Bradley filed for divorce. The official divorce was finalized in 2010.

Lil Wayne is Libra, and Lauren is Sagittarius. The couple met when Lauren was only 15 years old when she was an aspiring actress in 2000. Their relationship was with ups and downs, they were betrothed and parted, but the couple never made it into the newspapers. However, in 2009 when Lauren got pregnant, she hit the headlines. Fans accused her of being a fan and got pregnant by him after one night. However, they didn’t know that the couple had their own history before. When Lauren became pregnant, the couple decided to part, as it became known that another woman was pregnant with him. They remained friends.

Other Sagittarius and Libra celebrity couples