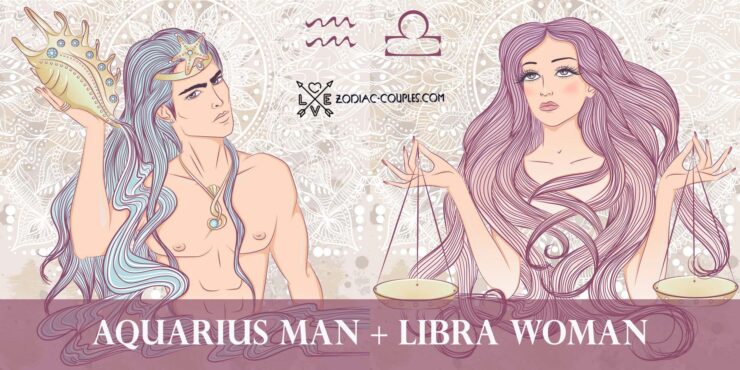 A pair of an Aquarius man and a Libra woman has high compatibility. The element of both signs is air, which perfectly characterizes them. It will be easy for partners to be together, as they will always find mutual understanding and are not prone to quarrels. They value personal space and freedom, so they will never violate the boundaries of their half.

Zodiac signs are distinguished by their positive outlook on the world and openness, which attracts the opposite sex. The Aquarius man and the Libra woman are the opposite of boredom. Their relationship will be bright, exciting, and full of surprises. They constantly come up with ways to pleasantly surprise their partner and how to spend their time. The couple does not criticize, argue, or reproach; always finds a compromise. As for the life path, together, they are so inspired by a partner that nothing is impossible in their imagination, and they consistently achieve their goal.

John is Aquarius, and Kelly was Libra. The couple met in 1989 at a screen test for the comedy The Experts. It was love at first sight for him, and she was married to another man. Kelly wasn’t happy in her marriage, and when she got divorced, the two started dating. Travolta proposed to Preston on New Year’s Eve 1991 and they got married in September that same year when Kelly was already two months pregnant. They always found the time for each other, despite their busy work schedules.

In 2009, terrible grief happened in their family: their son died at the age of 16. Travolta was heartbroken and grieving since his family and children were everything to him to this day.

The birth of a son in 2011 helped them recover from grief. The couple had three children together. In 2019, the couple celebrated their 28th anniversary, and the following year, Travolta announced the death of his beloved wife at the age of 57 from breast cancer. The family tried to get together with the children as often as possible and maintain close contact. They greatly appreciated their unity, and the loss of each family member is tough.

Dave is Aquarius, and Joy is Libra. They first met on the Welcome Home, Roscoe Jenkins set. In 2007 the couple got engaged and the next year tied the knot in Hampton. Joy and Dave have no children and are not planning to. Bryant says that there is too much pressure on women in today’s world about children and when to give birth, but everyone has a choice. Her mother had no choice to give birth or not because she was sexually assaulted. Dave also said that Joy was grateful to her husband for unconditional support in everything related to work and personal life.

Josh is Aquarius, and Kathryn is Libra. The two met eight years earlier before they got married. They tied the knot in 2016 after three years of dating and have one daughter together. In 2020 the couple announced that they are expecting their second mutual baby. Their age gap is 20 years, although they feel even more than okay with that. Their family is growing, and love doesn’t fade.

This marriage is very different from his previous one – with Diane Lane, an Aquarius woman.

Toni is Libra, and Keri is Aquarius. The couple got married in April 2001. Their first child was born at the end of the same year. She got pregnant with her second child when she was working on her fourth studio album, and because of the pregnancy difficulties, she was confined to bed rest. The child was diagnosed with autism. The two announced their separation in 2009, and in 2013 finally divorced. That was a tough experience for both partners.

❤️ After a tough divorce, Toni met Bryan Christopher Williams (known as Birdman), who is Aquarius. The couple started dating in 2016 and announced their engagement in 2018. It was called off in 2019 but they continued their relationship. In 2020 Toni said that she would love to marry Bryan, but there is no chance during the pandemic time. Bryan also has two children from previous relationships.