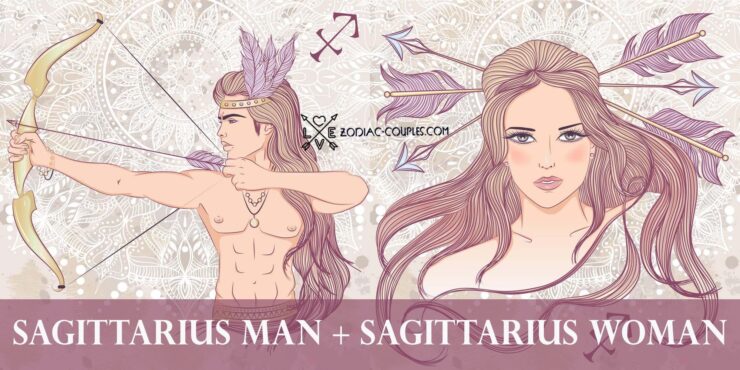 The Sagittarius man and the Sagittarius woman are quite capricious. In a relationship, they value freedom and will not tolerate encroachment on their personal space. This zodiac sign will never start a relationship if there is no benefit for them. In this case, the priority for them is that the partner is a kindred spirit for them. They are attracted to each other like magnets. The partners have common interests; they are interested in spending time together. Craving for everything new is what unites a Sagittarius man and a Sagittarius woman. They are comfortable growing and developing together.

The relationship of Sags cannot be called romantic; they are rather intellectual and strong. Partners are united emotionally, so they feel comfortable together. Relationship problems can arise due to their restraint; one of the partners will constantly lack love and understanding. If they want a long-term relationship, then it is worth learning how to show your feelings.

Michelle is Sagittarius, and Garret is Sagittarius. The couple met in 1996 while working together on the play 900 Oneonta. Michelle played Garret’s love interest and she was very worried before meeting him for the first time at rehearsal. It seemed to her that he was not interested in her, but in fact, he liked her so much that he could not find the words to speak. The couple got married in 2007 and have no children. They gave only one interview where they told how they met and kept their personal lives behind a closed door. However, they have been married for over ten years now, and there are no rumors of any problems in paradise.

Brendan is Sagittarius, and Afton is also Sagittarius. They met at a mutual friend’s barbecue in 1993. Their relationship was already four years old when the couple got engaged in 1997, and a year later, they got married. After marriage, the partners began to expand the family quickly, and they welcomed three children. After the birth of their third child, the couple announced their divorce in 2007. They did not explain the reasons and did not talk about the crisis in their relationship, so the audience began to wonder. The alleged reasons were infidelity and lack of love; however, none have confirmation and contradict the facts. Afton requested $ 900,000 in child support. However, in 2013, Brendan filed a petition to cancel child support, stating that he could no longer pay that amount. Afton believes he is hiding his financial assets.

Katie is Sagittarius, and Jamie is Sagittarius too. The super-secret couple, who at first denied their relationship and then hid from the public eye, allegedly met in 2005. At the time, Holmes’ future ex-husband Tom Cruise was working with Foxx on the set. In 2006, the three of them were spotted at a football match, and Katie seemed to be good friends with Foxx. Following the divorce, Holmes and Jamie were spotted together as a couple in 2013 but denied that fact. And in 2015, they were seen holding hands. Partners visited each other frequently at work and attended social events together. News of their separation came in August 2019, when Foxx was already with another woman. The couple had broken up a few months earlier.

Kenneth is Sagittarius, and Lindsay is also Sagittarius. Kenneth’s then-girlfriend introduced them in 1997. The partners met again on the set of the 2001 film Shackleton and then began their relationship. Kenneth and Lindsay were married two years later. Since then, the couple has not been separated. They have no children and live happily with their dogs. Kenneth says that his wife understands him better than anyone else and is many times smarter than himself. In it, he found everything he was looking for and never once doubted his choice.

Alyssa is Sagittarius, and David is Sagittarius. The couple started dating in 2007 and got engaged a year later. Preparations for the wedding took them another year, and the partners tied the knot in August 2009. For Alyssa, this is the second marriage and, apparently, it turned out to be successful. In 2011, the couple had a son, and three years later, the union welcomed their daughter. The partners were very lucky, as they mutually agreed on the love of animals, and they have practically a mini zoo at home: the couple has three dogs and four cats, and it seems that they never get bored in their house. We wish them long and happy family life.

DJ Khaled is Sagittarius, and Nicole is Sagittarius too. The couple met in the 1990s. Their relationship began in 2009, but the couple was not engaged until their son’s birth in 2016. The birth process thundered all over the world, as Khaled filmed and posted everything on Snapchat. In 2020, the couple welcomed their second child. It is known that the partners are married, but the time and circumstances were not disclosed. The partners decided to leave it only for the two of them. Now a happy family is raising two kids and sharing cute photos on Instagram.