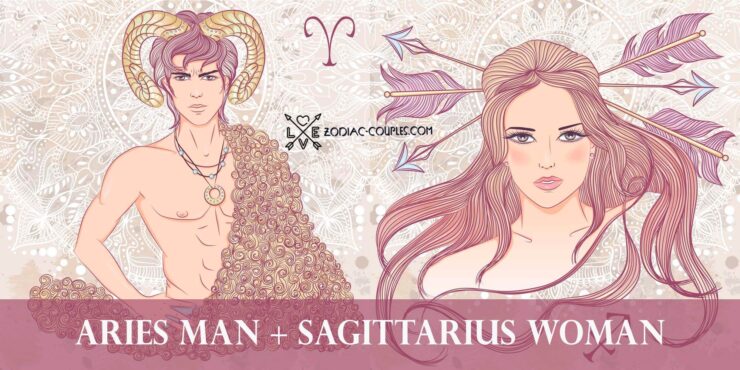 Aries man and Sagittarius woman attract each other literally from the first meeting. Their interest does not allow them to let go of each other, so their relationship develops rapidly. The Aries man knows how to look after a lady for a long time and beautifully, but although Sagittarius woman gets pleasure from it, her freedom-loving will not let him in too quickly.

In a love relationship, a woman will give the man a dominant position. However, she will allow him to direct their relationship in the right direction, controlling the encroachment on her independence. Although a man is a romantic and knows how to win women’s hearts, he is not willing to open up, and a woman will never be able to understand what feelings Aries is experiencing fully. These zodiac signs’ union has good chances, but it cannot be called calm and stable. There will always be some emotional struggle between partners.

Britney is Sagittarius, and Kevin is Aries. The partners met in 2004, and their romance developed rapidly. Three months after they met, they got married at a surprise party. Just as quickly, they began to expand their family, and a year later, they welcomed the first child and later the second. However, the union’s marriage did not last long, and in 2007, they decided to divorce. Although the partners were no longer in a romantic relationship, they were responsible for two sons. The parents had to find the best option for a custody agreement. At first, it was 50/50, but later the father began to spend 70 percent of the time with the children, and they feel great.

Ewan is Aries, and Mary is Sagittarius. The couple met in 2017 on the set of Fargo, but they had seen each other earlier in 2016. They fell in love with each other on the set, and it turned into a loud scandal. Ewan has been married for over 20 years and has 4 daughters together with his ex-wife. In 2017, McGregor and Winstead were spotted on a date together. This was the beginning of the end of his then marriage. After that, he divorced and notoriously ruined relations with his family. His daughters publicly insulted his girlfriend on Instagram and refused to forgive their father for such an act. In 2018, during the presentation of the Golden Globe Awards, McGregor thanked both his family and his new girlfriend. The family did not appreciate this gesture. Now, these two are in love and happy together.

Alec is Aries, and Kim is Sagittarius. The couple first met in 1990 on the set of the movie Marrying Man. They fell in love at dinner while discussing the film and their relationship quickly became romantic. In 1993, the couple got married just six weeks after they got engaged. In marriage, they had one daughter. In 2001, Kim filed for divorce, and it seems she has been thinking about it for a year and a half. The reason was different views on many things and Alec’s anger. The divorce turned out to be a fierce struggle for custody, and then he regretted that he had not drawn up a marriage contract because he did not think that he would ever get a divorce.

Elisha is Sagittarius, and Dion is Aries. The partners started dating in 2008. After four years of relationship, Elisha and Dion announced their engagement, and in 2013 they tied the knot. He is a professional hockey player, and she is a Canadian actress, and their love of sports unites them. The couple has one child. The family happily lives in Toronto during the hockey season, and during their holidays, they travel to the Dion hometown island.

Christina is Sagittarius, and Martyn is Aries. The couple met shortly after Christina’s partner died of an overdose in 2008. Her life difficulties did not end there. When the couple first started dating, she was diagnosed with breast cancer. Martyn supported her and was with her throughout the treatment. After she underwent surgery and treatment, Martyn proposed to her in 2010, and a year later, they had a child. The union got married in 2013 at their home in a secret ceremony attended by only six people. Now the partners are raising their daughter and overcoming all the trials of fate, and they have only become closer.

Christina is Sagittarius, and Matthew is Aries. They met when, in 2010, Matthew was an assistant producer during the filming of Burlesque. She was still married at the time, but a year later, she divorced, and in 2013 started living with Matthew and his son. A year later, the couple got engaged on Valentine’s Day, and in August, they welcomed the baby. By 2021, the couple is still not married, and there is no planned wedding date, but it seems that this does not prevent them from living in a big, happy family.