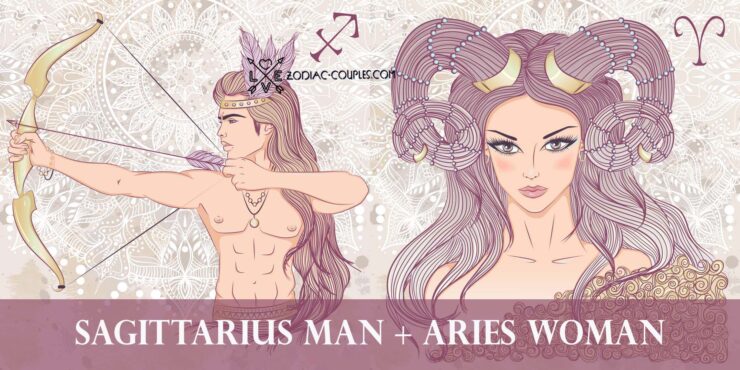 The Sagittarius man and the Aries woman are representatives of the fire signs of the zodiac. This suggests that the partners will not give each other peace, which is not bad. Their relationship will be vibrant, emotional, and passionate. Sometimes partners can go to extremes, from strong love to strong hate. They often quarrel and sort things out in public, which confuses others and worries about their relationship. However, after a couple of minutes, a passionate reconciliation follows.

These are two strong and self-sufficient personalities. Both zodiac signs love to spend time actively; laughter and fun always reign at home – anything but peace and quiet. The union’s problems arise when the Aries woman becomes jealous of her man for the surrounding friends, girlfriends, and acquaintances. She plunges into a relationship and gives all of herself. If she does not receive the same return, she feels not loved enough and can control her partner. A man does not know how to give all his emotions to one person, but he will have to learn. These two live like walking through a minefield; you never know where it will explode. It seems like Aries and Sagittarius are enjoying this adrenaline rush.

Vincent is Sagittarius, and Tina is Aries. The couple met in 2016 when Tina was only 19, and he was already 49 years old. The first months after they met, she did not even know that he was a famous actor. The age difference did not bother them, but society did not expect the two to get something serious. The partners tied the knot in 2018 at an intimate ceremony. A year later, they had a daughter together. This is Tina’s first child and Vincent’s third child. Even though no one could believe in this relationship’s success, these two showed their true love and serious intentions, and that age does not matter.

Benjamin is Sagittarius, and Talisa is Aries. The two met on the audition to the Blood In Blood Out in 1993. At that time, their meeting did not lead to anything, and she married another man. After Soto’s divorce, he and Benjamin met again in 2001 on the set of Pinnero. This time it all ended with their wedding a year later. The couple has two children. The relationship between them is hot. Benjamin is infinitely proud of his beautiful wife, former model, and current actress. For him, she is undoubtedly an interesting and bright woman who is burning with her career and her children.

Leighton is Aries, and Adam is Sagittarius. They met on the set of The Oranges in 2011. The first news of them as a couple rocked in 2013, and the next year the duo tied the knot at the intimate ceremony. The couple has two children. They repeatedly delighted the audience with their cute red carpet public appearances. In 2017, they gave their first joint interview where they told how glad everything turned out that way and fell in love. They spent the 2020 quarantine together with the children, and, as Adam says, it was a great time and experience.

Claire is Aries, and Stephan is Sagittarius. The couple first met, starring at the film Season of the Witch in 2011. They tied the knot in 2014 and had their daughter born next year. However, their marriage was not destined to last long. In 2018, Claire confirmed their separation and divorce. Even though they are not together, they decided to go through this difficult time in a civilized manner. They have remained on excellent friendships and respect each other. Their separation was a big shock for friends and relatives, but they still supported the couple. If the partners realized that their relationship was not working, then completion was the best decision.

Kate is Aries, and Chris is Sagittarius. They met in 2000 at a party and started living together just a couple of days later. In the summer of the same year, the partners got engaged, and by the new year, they got married. They had one son together. Everything seemed wonderful. They inspired each other in creativity, and in an interview, Hudson could not get her status as a wife. On her mother’s advice, she took a year’s leave to devote herself entirely to family life. However, their relationship was not stable, from great love to great hatred. In 2006, the partners broke up. The court recognized joint custody of the child, and the partners parted without conflict. In 2017, Robinson filed documents with the court to review the terms of custody. It is unknown exactly what changes were made, but both parties came to an agreement and were satisfied.

Judd is Sagittarius, and Leslie is Aries. The couple first met on the set of The Cable Guy in 1996. During this time, they began dating, which led the couple to get married in 1997. Undoubtedly, for Jude, their meeting was love at first sight. When married, Jude and Leslie welcomed two beautiful daughters. Much to their surprise, according to Apatow, the secret of their long marriage is constant quarrels and a showdown. They do not accumulate anger and resentment and clarify everything at once on the shore.

Other Aries and Sagittarius famous couples