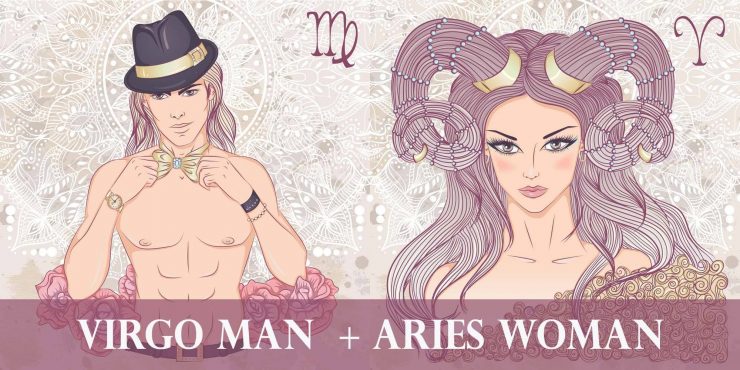 Even though the love horoscope does not predict the excellent development of the relationship of these zodiac signs, they can still be good together. Long-term relationships between a Virgo man and an Aries woman are possible when their relationship is based on some kind of personal gain and mutual concessions. In this case, partners in the process of living together and communicating get something for themselves; this already becomes a good ground for a happy union. But even then, Virgo and Aries need to work on the relationship, because no external force can keep them together.

Keira is Aries and her husband James is Virgo. They’ve met at the party in 2011 and got married in 2013. Now they have two kids and look really happy. But as they both confess, their marriage requires efforts and a lot of work to find a balance.

Reese is Aries and Ryan is Virgo. They’ve met at Reese’s 21st birthday party and very soon started dating – in 1999 when Reese was already pregnant, the couple got married. Unfortunately, their relationship as a couple faded away, and in 2006 they announced a divorce. As they both said, they were very young when they’ve met, and after years, they both changed, and it was the right choice to separate. Nevertheless, they remain friends and good parents, and both are happy now.

Different temperaments of Aries and Virgo may lead to partners not being able to resolve issues constructively and quickly. Because of this, problems only drag on and get worse.

Stephen is Virgo, and his wife Tabitha is Aries. They’ve met in university and were two absolutely different personalities. They wed early, got two kids, and life was not easy till King published “Carrie” thanks to his wife’s support. Later, Stephen started to drink, and that was a point when his wife could leave him. But he chose a family and tried very hard to escape his addiction. They are both writers, philanthropists, and even if things got tough, they are there for each other till today.

Keanu is Virgo, and Alexandra is Aries. The couple met in 2009 at a dinner party, and their meeting turned into a collaboration on two books. Initially, their relationship was exclusively working. However, since Reeves keeps his personal life especially private, it is unknown when their relationship turned into love. In 2019, they debuted as a couple on the red carpet at the LACMA Art + Film Gala. A love of art and literature unites the partners, so their relationship is especially strong.

Macaulay is Virgo, and Brenda is Aries. The couple met on the set of the film Changeland in 2017. At that time, the first hints about their relationship emerged after being seen together in public. Already in August 2018, Culkin said that he was thinking about creating a family with Brenda. The partners were so happy together that they felt it was too good to be true. The partners’ desire to become parents turned out to be quite serious, and in 2021 they announced that they had become parents. The couple hid the pregnancy.