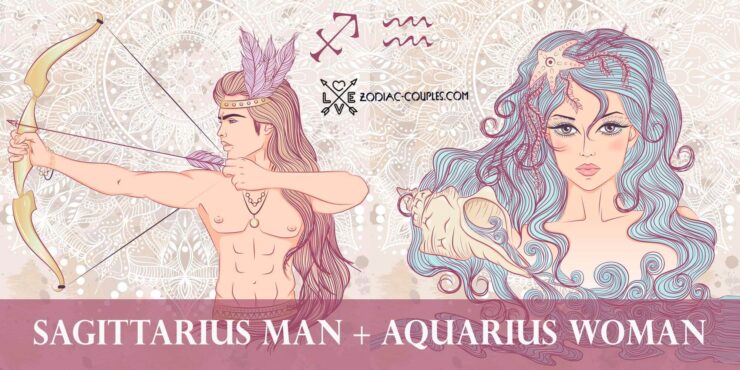 Sagittarius man and Aquarius woman are two temperamental signs of the zodiac. They quickly fall in love from their first dates, and often their separation happens just as unexpectedly. The unions of these signs are happy and bright but usually not permanent. The reason for this is the tempers of the partners. It is difficult for them to control their emotions, so they cannot withstand the constant struggle.

The Aquarius girl is very open, sociable, and straightforward. The lady’s sincerity will attract a Sagittarius man since he does not tolerate hints and pitfalls. Both zodiac signs value personal freedom, so they do not set boundaries and restrictions in a relationship. Everyone can have their own social circle, their friends of the opposite sex. They can go to parties separately, and this does not cause jealousy and suspicion in the partner.

The frequent finding of partners apart can lead to negative consequences in a relationship. A Sagittarius man needs to be close to a woman. Otherwise, his feelings begin to fade. In this case, he can have an affair with someone from his surroundings, which will later develop into a full-fledged romance.

Brad is Sagittarius, and Jennifer is Aquarius. The couple met in 1994 when their managers were friends. In 1998, their agents arranged a date for them, which went well. They understood from the first date that there was a special bond between them. Brad and Jennifer tried to hide their relationship, but both were at the top of their fame, and it was not so easy to hide from the paparazzi. A year later, the couple became engaged, and in 2000 they got married in a pompous wedding.

The couple did well until Brad was filming with Jolie. By the end of the filming, he realized that he and his colleague had a thing. In early 2005, “Brannifer” announced their divorce, which was finalized in October of the same year. Despite the unpleasant situation, the couple managed to part with each other peacefully and without accusations. They are friends now.

Giovanni is Sagittarius, and Agyness is Aquarius. The couple started dating in 2012 and got married just a few months later. Nobody knew about their relationship, so the wedding came as a surprise to everyone. They continued to maintain the privacy of their union and rarely appeared in public together. In January 2015, Giovanni filed for divorce, claiming that the couple had broken up a month earlier. The divorce was finalized by the end of the year, and the partners managed to come to an agreement. The couple had no children.

Christopher was Sagittarius, and Tammy was Aquarius. They met in the early 1950s while working on a play on Broadway. The couple began a relationship, but they got married just a few months before their daughter’s birth in 1956. The union of the two ended abruptly, especially for Christopher. Tammy just packed up all her things, sent them to the hotel, and told her husband about the divorce via the director. Later, in her memoirs, she discussed the topic of relationships and said that the couple took too much pleasure in success separately and were too young to take responsibility for marriage and raising a child. Although both had married yet, they had no more children. Tammy and Christopher lived long lives, and both died of natural causes. He did not communicate with his daughter but renewed contact when she was already an adult.

Walt was Sagittarius, and Lillian was Aquarius. In 1924, Walt needed a girl with ink and paints for the company, and through an acquaintance, he got a job with Lillian. It seems that chemistry immediately arose between them, and cooperation grew into a relationship. The couple got married in 1925. Lillian quit her job but often slept on the couch to be with her husband. The couple had two children. She became his right hand, chief judge, and adviser. While working on his projects, he first tried to get her approval, and she always guided him and gave him the best advice. The couple lived happily married for 41 years until Walt’s death in 1966.

Vanessa is Aquarius, and Franco is Sagittarius. The couple first met in 1966 at Warner Bros. Studios while working on a musical together. However, they had to come a long way before marriage. At first, Vanessa did not make an impression on Franco, and he considered her ugly. But she invited him to dinner at her home, and he saw her in a completely different role. She was amazing, and this was the beginning of their romance. Vanessa already had two children from a previous marriage, and they had another child with Franco. The couple broke up shortly after a child’s birth and went a long way before being reborn in 2006. Then the partners realized that they were destined to be together and got married. Even though many years have passed, they love each other more than ever. Now they stick to proper nutrition together to stay in shape and support each other.

Jane is Aquarius, and James is Sagittarius. The couple married in 1993, a year after Jane’s divorce from her past husband. The union had two children married together, and Jane also had children from previous marriages. The family lived happily together for 20 years until she filed for divorce in 2013. The reason was James’ infidelity. Jane was shocked. She did not expect such a betrayal from her husband. The mistress turned out to be a woman she knew, which had already been going on for some time. Jane was grieving at the betrayal. The divorce was finalized in 2015.

Other Sagittarius and Aquarius famous couples