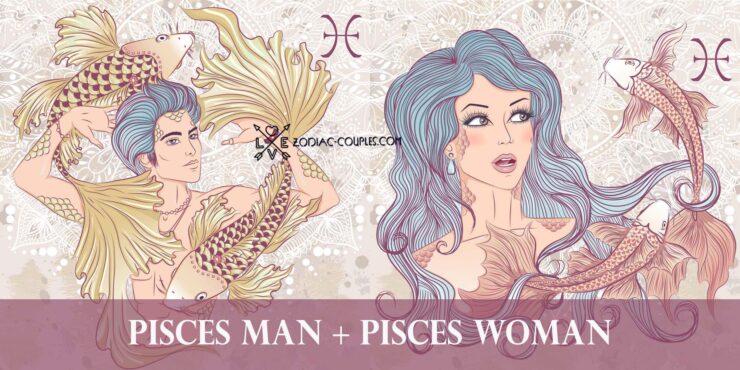 The Pisces man and the Pisces woman have perfect compatibility. Partners feel the closeness of souls. Like Siamese twins, they always feel the need for each other, and even after many years of living together, their feelings do not fade away. They are still desired and open up new sides of each other. The zodiac signs are not vindictive and not conflicting, quickly forgive and do not hold a grudge against each other. However, there are downsides to the fact that the characters are so similar in nature. They are impractical, do not know how to conduct life, and do not know how to keep track of money – dreamers who consider home, everyday life, and money to be something too boring and serious.

Zodiac signs are easily influenced. Their opinions can constantly change, which causes difficulties in the relationship. They also tend to show themselves better than they really are and lie. The first early relationship usually does not work out, but they meet their person after gaining life experience. They find common goals, interests, outlook on life. Seeing understanding in the eyes of a partner, they begin to build a life with him.

Jensen is Pisces, and Danneel is Pisces. They fell in love on the Ten Inch Hero set, started dating in 2007, and tied the knot in 2010. They met long before they got married and were friends for a decade. The two have three children together: Justice, Arrow, and Zeppelin. Jensen and Danneel keep their life private, although it is known that they are in love and extremely happy together. Jensen is a close friend of his TV brother Jared Padalecki, and the two families spend a lot of time together.

Kate and Jamie are Pisces. They first met in 2005 on the screen test for a movie, where they had to kiss. That time she kissed a lot of guys but remembered only Jamie. It took them 10 years to fall in love, and it happened during the press tour of Fantastic Four. The two got engaged in 2017 and tied the knot six months later. In 2019 Kate confirmed that she expects their first child, and a baby girl was born in May of the same year. Jamie has a son from a previous marriage, and the couple often spends time with two children. It seems that the couple took their time and took full responsibility for building their relationship. Their marriage is not many years old, but they are on the right track.

Daniel is Pisces, and Rachel is Pisces too. The first meeting of the couple took place in 1994 at the National Theater Studio, when they were not yet famous. However, then it did not lead to anything. Their next meeting took place on the set of the movie Dream House in 2010. The moment their previous relationship ended, the couple had time to sort out their feelings. So in 2011, they got married. The success of a couple’s relationship lies in their complete privacy when only two people know everything that is happening. In 2018, they had a daughter, Rachel also has a child from a previous relationship.

Michael is Pisces, and Shakira is also Pisces. The love story of this couple is better than any movie plot. Michael first saw Shakira in a coffee advertisement in 1971 and immediately fell in love. He decided to find a beautiful girl at any cost and was ready to go to Brazil. Still, the lady ended up being from America and worked in London. He called her 11 times asking her to meet, but she refused until she finally agreed. He fell in love with her in 8 minutes, and it took her 2 hours.

They got married in 1973 and had a daughter that same year. Shakira, by her appearance in his life, helped him get rid of bad habits. Michael always wanted to return home to his wife because it was with her that he felt calm and comfortable. This woman managed to give him everything he needed. They still live happily together today.

Tonya is Pisces, and Spike is Pisces. They met in 1992 at a Congressional Black Caucus dinner. She attracted him at first sight, and he tried to catch her attention. They tied the knot in 1993. The two have two children together. They are surprisingly different people: she is a lawyer, and he is a famous producer. After marriage, Tonya realized that she always wanted to write books and produce, with which her husband helped her and provided significant support. She didn’t give up the lawyer’s work, and he achieved even greater success with her.

Chelsea is Pisces, and Jordan is Pisces. The couple met on Twitter in 2013. They started dating after about a year, but how exactly no one knows. In 2015, Jordan proposed to Chelsea during a family talent show. They got married in 2016, and the ceremony was completely secret, with their dog being the only witness. In 2017, the couple had a child who was predicted to become a great comedian. Chelsea did not think that she was destined to become a mother and wife, but meeting with Jordan changed her plans. Partners support their relationship with humor and unconditional love.