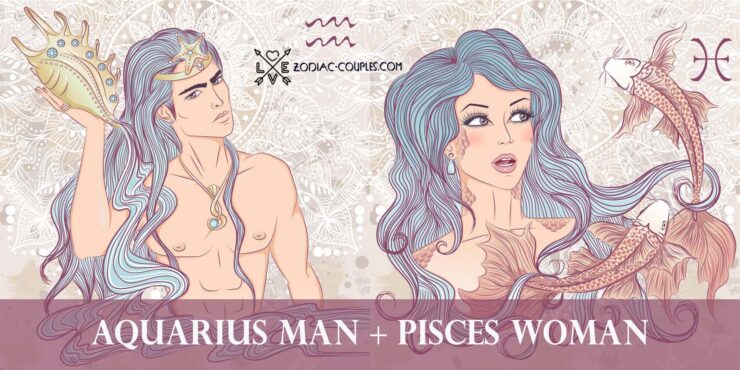 The relationship between an Aquarius man and a Pisces woman is one of the few where the partners do not fight for leadership. There is no one in charge in this pair; they divide everything in half. Others consider this union strange and interesting since both signs are dreamers. However, the woman is responsible for emotions, and the man is responsible for the mind.

They feel good together, but since these signs are calm and dreamy, the passion may fade away, and the partners will constantly need to make an effort not to sink into the routine.

Jessica is Pisces, and Justin is Aquarius. They are an amazing, loving couple with an equally amazing history. Justin and Jessica met at a party in 2007 and later began dating. However, in 2011, the couple announced the separation by mutual agreement. They remained on good terms, and Justin spoke of her in an interview as the dearest person in his life.

At the end of the same year, Timberlake proposed to Jessica, and they got married the next year. Perhaps this break only strengthened their relationship. However, not everything was so smooth. Once, Justin had to apologize to his family for inappropriate behavior and a bad example for his son when the public suspected him cheating on his wife. The couple has two children.

Nick is Aquarius, and Lili is Pisces. The couple met in 2004 at the dinner and were introduced by their mutual friends. This was the start of a long dating, and the couple got married five years later. They have a daughter. Nick and Lili spent their 2020 quarantine in a country house with their family, enjoying the peace and singing of birds.

Paul was Aquarius, and Joanne is Pisces. They met in 1953 while Paul was still married. However, in 1957, fate brought them together again, and he could not cope with feelings. The couple married in 1958 and lived together happy 50 years until Paul’s death. He died in 2008 of lung cancer. They have three daughters. During their life together, the spouses were engaged in many projects and also got bachelor’s degrees.

Darren is Aquarius, and Rachel is Pisces. The couple met in 2001 and began dating the following year. As it is known, in 2005 Darren and Rachel got engaged, but they were never married. Their son was born in 2006. The couple announced that they had been living separately for a couple of months in 2010. Still, as responsible parents, they managed to maintain friendly relations and raise their son equally.

John is Aquarius and Elizabeth was Pisces. They got married in 1976, and John filed for divorce in 1982. When the couple got married, John began his political career and, as a result, was elected to the Senate. Elizabeth quickly got bored of being the wife of a politician. She felt lonely and began to abuse drugs and alcohol. It is worth noting that this was Elizabeth’s sixth marriage.