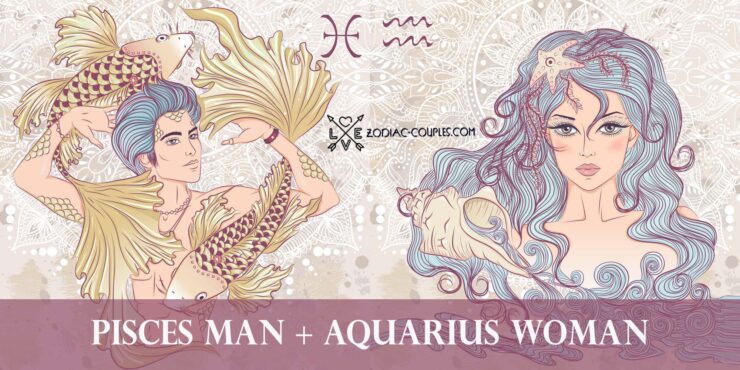 Zodiac signs of Pisces man and Aquarius woman contradict each other. They belong to different elements, have different temperaments and views on life. Their relationship is two extremes: either strong love or strong hatred. These are connected signs that subconsciously reach out to each other. They are interested in each other from the first meeting, talk a lot, and try to know each other. However, they do not enter into a relationship immediately.

He is ready to give all of himself to the relationship; she is his muse. Pisces man provides attention and care, which Aquarius woman gratefully accepts. A man thinks very deeply and in a relationship will teach a woman intuition, perception of the world, and emotions. She is very light by nature. Therefore, she will give him peace of mind, positive and interest in life.

When the stage of knowing each other and spirituality passes, partners, take off their rose-colored glasses. They notice more and more differences, which may become annoying. Here partners need to learn to look for compromises, to respect other people’s views. If everyone stands their ground, the couple will soon part, and the initiator will be the one who has a better-developed intuition.

Geena is Aquarius, and Renny is Pisces. The couple started dating in 1993, and after five months, they got married. He is a director, and she has starred in his films Cutthroat Island and The Long Kiss Goodnight. During the marriage, the partners worked together and built a career, and in 1997, Geena filed for divorce. According to sources, the reason for the divorce was Rennie’s infidelity. It was believed that he started an affair during a short separation from his wife, but there was no separation, and they lived together all the time. Geena was not aware of the betrayal until his assistant gave birth to a child from him. A divorce followed immediately. The couple had no children, but there were many dogs over which they shared custody.

Oprah is Aquarius, and Stedman is Pisces. The couple met in 1986 at a charity event. After their meeting, Oprah thought he was too handsome to be interested in her. However, already in 1987, when Oprah already had her show, he called her in the studio as her boyfriend. The partners radiated love for each other, and in 1992 he proposed to her, but the wedding never took place.

Oprah only commented on the fact that they were not married in 2017. According to her, they did not raise this topic anymore. Still, when she asked him, he replied that marriage would destroy their relationship since both would try to play the role of husband and wife in the most traditional sense, which would kill their relationship. Even though for 25 years of their relationship, they have not been married, their relationship is growing stronger every year. They continue to do the little things for each other and arrange dates.

Jennifer is Aquarius, and Jon is Pisces. They met in the late ’90s at a mutual friend’s birthday party when both of them only started their acting careers. He seemed to her very arrogant, and she did not plan any relationship with him. Later she was advised to call him to help her scold the script, and then she fell in love. They started dating in 1997. However, it seems that the partners have dedicated all their relationships to building careers. Of course, both achieved success, but their union did not progress. 18 years later, in 2015, they announced the separation by mutual agreement. However, their close people say that Jennifer is simply tired of fighting. Jon is an avid party-goer and spent a lot of his free time in companies. The couple never got married, as Hamm said that those who plan children get married, but he was not ready.

Chynna is Aquarius, and William is Pisces. They met on the set of Backdraft in 1991. It seemed that the universe wanted them to be together, as everyone around was talking to Chynna about it. The meeting at the airport where he first spoke to her was decisive. They got married in 1995. The couple has three children. Their marriage was not always perfect, and was going through hard times. So in 2010, when Chynna started having stress problems, she decided to file for divorce. William was overwhelmed by this news. However, immediately after the divorce papers were filed, Phillips realized that she didn’t want to lose her husband and withdrew the documents. They managed to cope with her anxiety disorder, their son’s cancer, and rebuilt their relationship. Now they love each other and least of all want people to get divorced.

Mark is Pisces, and Julia is Aquarius. Their love story began at the Sundance Film Festival. After the first communication, they realized how much they have in common. The partners did not take long to understand that they were created for each other, and after 10 months of the relationship, Mark proposed to Julia. They got married in 2019, and their wedding was very intimate with the closest people. The couple is just beginning their journey in family life, and we wish them to find everything they need in each other and build strong relationships.

Other Aquarius and Pisces famous couples