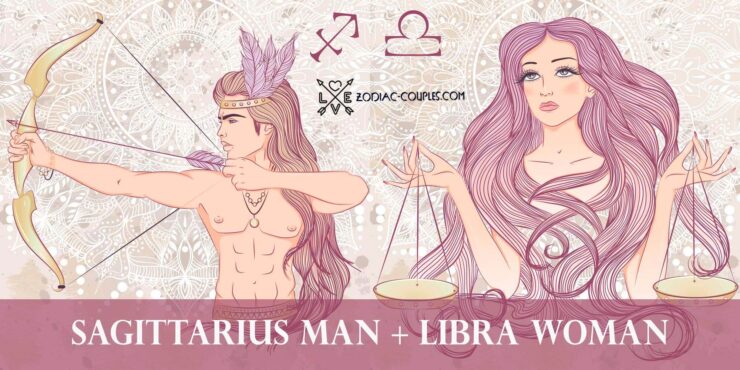 Between the Sagittarius man and the Libra woman, chemistry appears from the first minutes of the meeting. They are like magnets attracted to each other and most often form a long and strong union. Although the zodiac signs belong to different elements, which speak of their opposite, they complement each other. Both signs are non-conflicting. They know how to talk and find a compromise and solution to problems arising in a relationship.

The relationship between a Sagittarius man and a Libra woman is full of romance, understanding, and mutual respect. They prefer an active lifestyle, love to spend time together. A woman gives a man the confidence he needs; he, with his admiration, helps to open up her as a woman.

Conflicts between partners can arise at the household level, but they can agree even here. Another reason for quarrels can be behavior in society since male Sagittarius can be annoyed by lady Libra’s excessive openness.

Monica is Libra, and Vincent is Sagittarius. The couple met on the set in 1996. This is not to say that it was love at first sight because the actors did not like each other. And later, Vincent tried to persuade Monica to start a relationship with him, and when she finally agreed, she set boundaries – everyone lives their own life. After five years, the two tied the knot, but they continued to live in different cities. They had two children in the marriage. The hardest thing for them was the habit of living apart. Monica became a late mother and said that was when she was ready. She wanted to devote all her free time to the children, so her daughters’ birth positively affected their relationship. However, the couple still decided to divorce in 2013 by mutual agreement. The divorce went without scandals.

Ozzy is Sagittarius, and Sharon is Libra. The couple met in 1970 when Ozzy’s band was signed to her father’s label. At that time, she was very young, and their meeting did not lead to anything. The couple began dating in 1979 and tied the knot three years later. The couple has three children. The union with a rock star has consequences, so their relationship had to endure many difficulties and trials. Substance abuse and cheating news arose, so in 2016 the couple announced that they were tired of fighting for a relationship and decided to divorce. However, they later gave the relationship another chance and are still together.

Samuel is Sagittarius, and LaTanya is Libra. The couple met in 1970 as students. Initially, they did not immediately find a common language, and later chemistry appeared between them. The two tied the knot in 1980. The couple has one child. After her daughter’s birth, Richardson began to work less often to devote quality time to the child. The secret of such a long marriage of partners is that they never go to bed quarreling and angry with each other and always say “I love you” before bed.

Woody is Sagittarius, and Soon-Yi is Libra. The couple met in 1990 when Previn was injured while playing basketball. Allen started attending her matches, and their communication became closer. The partners have 35 years difference. Their relationship created a scandal when Allen’s then-wife found Previn’s naked photos at their home in 1992. Then he made a statement about his feelings. The partners got married in 1997 and adopted two children. Their relationship is 30 years old, and they feel great.

Cardi B and Offset ❤️

Cardi B is Libra, and Offset is Sagittarius. The couple went on their first date in February 2017. Cardi was very worried since the date was public, and she did not want him to make her look bad. However, Offset reassured her of his feelings. Later they began to appear in public. In the same year, he proposed to her on stage, and the two got married. In 2018, their first child was born. At the end of the year, the couple announced their separation due to Offset’s infidelity. He had a difficult time parting and tried to win her back. After many expensive gifts and deeds, Cardi agreed to reunite with him in February 2019. Since then, the couple is doing well, and Offset tries to be the best for her.