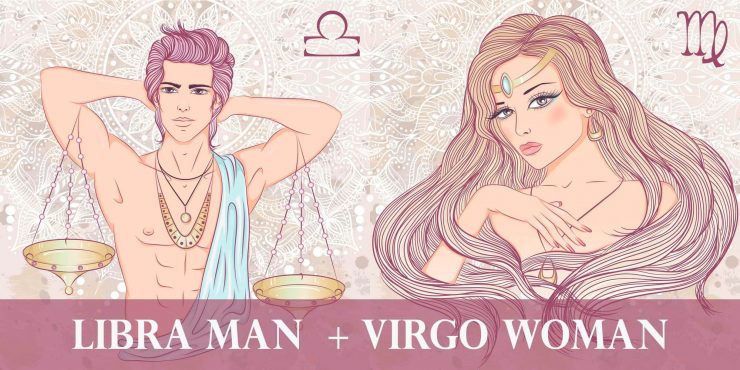 An interesting union. Here, different options for the development of relations are possible, however, if Virgo and Libra get married, divorces in this couple are rare: both prefer to put up with the partner’s shortcomings, since it is easier for them to maintain something that exists than to start all over again.

Libra man and Virgo woman are a rather unusual combination. They are a calm couple. Here, the rationalism and practicality of Virgo restrains the Libra’s desire for change, creates a solid foundation for family life. Both spouses are intellectuals, they enjoy spending time together – this couple is never bored with each other. Until Virgo starts reading the notation. But the Libra man will smile at her, and the problem will be solved. The Libra man brings sensuality and emotionality to the relationship, which Virgo lacks so much.

Will is Libra and his wife Jada is Virgo. It is an iconic Hollywood couple that exists since 1997 when they got married. They have three children. Although, their marriage is not so perfect – few years ago Will and Jada decided to separate for some time to sort out each other issues. Fortunately, they could work out their differencies and now they are together sharing “unconditional love” for each other.

Ryan is Libra (although, he was born on the Libra-Scorpio cusp) and Blake is Virgo. At first, they were friends, but later in 2011 they started dating and now they are married and have three kids. And you probably have read their funny tweets or Instagram posts where they are trolling each other. This couple is considered as happy and successfull.

Carise is Virgo and Guy is Libra. They have met on a movie set in 2016 right after he divorced his wife and experienced hard times. Later that year they welcomed their son. Guy said, that their relatioship started quickly and messily, but because of their child they decided to “make a step back” and start again responsibly. He is very grateful to Carice and their boy for the changing his life for the better.

Pisces days sharpens intuitive abilities with unprecedented intensity. There is an increased sensitivity to the opinions of other people. Pisces days are perfect for any artistic endeavor, so it's time to pursue ideas that require creativity. Trust your intuition more.