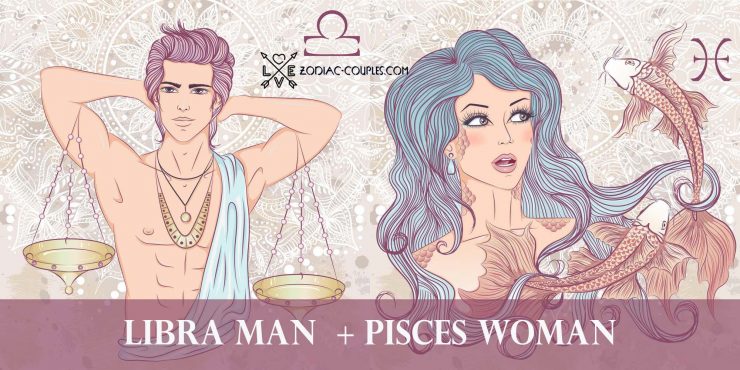 Libra man and Pisces woman do not assume that they will find happiness and love in each other – they can be familiar for a long time, communicate as friends, but not consider a friend as a potential lover. Something should happen that will bring the couple closer together, that will allow a man to consider caring and self-sacrifice person in Pisces, and a woman to see strength, reliability, and courage in Libra. In this case, their union is even, trusting, in which everyone finds serene and quiet happiness.

A man in alliance with Pisces receives a caring and gentle companion, the absence of scandals, and unanimity in matters of leisure. In difficult times, she will support him. A woman finds in a Libra man a soft, pleasant, and compliant partner.

In marriage, they are most often happy. Both believe in the eternity of family ties, respect marriage in the general sense of the word. There is only one problem. Both signs are essentially led in a relationship, not leading and will often shift their difficulties onto the other. They will have to grow up to build successful relationships. They may be dissatisfied with each other, but they know how to accept and justify their partners like no other.

But in such a marriage there will be a strong friendship. They know how to love each other, support, and trust. It might be a little boring, but it’s a solid foundation of a relationship.

Bryce is Pisces and Seth is Libra. They both attended New York University and met there in 2001. After five years of dating they got married in 2006. They have two kids now and came through Bryce’s post-natal depression after first child birth together. Both keep working and developing their careers, but family is most important for them.

Emily is Pisces and John is Libra. They have met in 2008 and say that it was love at first sight. Next year they got engaged and got married in 2010. Now they have two children and work together on their projects. They both say they are luck to have such spouse and feel such support.

Vanessa is Pisces and Ramon is Libra. They married in 1987 and has three children. Ramon was also Vanessa’s manager so they worked together, but as she says – when kids and career goes first, the marriage change. In 1997 they divorced, as she says there were “infidelity issues”. But also Vanessa said that all her husbands are decent men, so we assume they parted on good terms.

Jenna is Pisces and Lee is Libra. They met at the film festival and worked together on a movie. That’s when they developed feelings for each other. In 2009 they got engaged and in 2010 they were married. They have two children. Jenna says she is proud to be his wife and that they created life-work balance in their life.