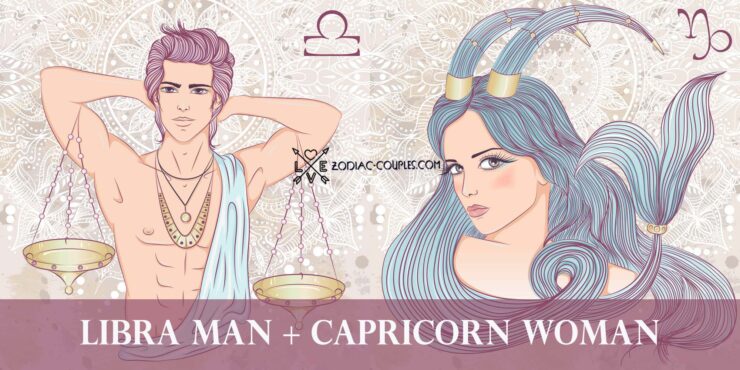 The union of the Libra man and the Capricorn woman is full of contradictions. Their outlook on life and priorities may differ. Still, this is not a problem for these two, and they will be able to find a common language and come to a compromise. They will overcome all the difficulties in their path and become a healthy couple and family if they wish. A man is romantic by nature, and he likes to figure out how to surprise a girl. He also subtly feels her needs and mood, making it easier for him to win her heart. The lady is guided by logic and continuously analyzes everything around her so she will look closely at her partner.

The relationship between a Libra man and a Capricorn woman will initially look like a romantic movie. Everything will seem perfect to them. However, after a while, they will notice that the ideal does not exist, and there are some disagreements in their union. These misunderstandings will not be serious, so they will not correct anything. Relationships develop in stages, and partners come to the idea of having children consciously.

Sting is Libra, and Trudie is Capricorn. They met in the 1970s. They lived next door, and Trudie was his wife’s friend. They are not proud of how it turned out, but the two found love for life. After ten years of relationship, they got married in 1992, and the couple has four children together. Sting also has two children from a previous marriage. The secret of their relationship and long marriage is that they don’t just love each other; they are also best friends.

Amanda is Capricorn, and David is Libra. The couple met in early 2006 through Amanda’s manager. From the first meeting, she felt that this was her man and she wanted to marry him. And so it happened. They started dating shortly after they met and got married just a couple of months later, in the fall of 2006. The couple has three children together. David admires his wife, her work and constantly celebrates her successes. He also notes her positive influence on him and that it is easier for him to achieve his goals with her.

Jeff is Libra, and Emilie is Capricorn. The first meeting of partners is similar to the plot of the film. The couple met at Equinox gym on Sunset Boulevard. Jeff saw Emilie in a crowded room and came up to her to start a conversation. For him, it was love at first sight. They got married in the fall of 2014. The pair have two children together. For Jeff, this is the third marriage, but the way the couple managed to keep the same spark as when they first met at the gym amazes. Jeff is shining when he speaks of his wife.

Elaine is Capricorn, and Stephen is Libra. The couple met on the set of the film The Truth in 2006, and a year later, the two got married. Both actors worked hard not only on their careers but also on their relationships. The secret of their marriage is that they respect each other, listen and hear. Parenting became a natural step in developing their union, and it was a conscious decision for which they were ready. Now the couple has two children, and they arrange their busy schedules in such a way as to spend enough time with the family.