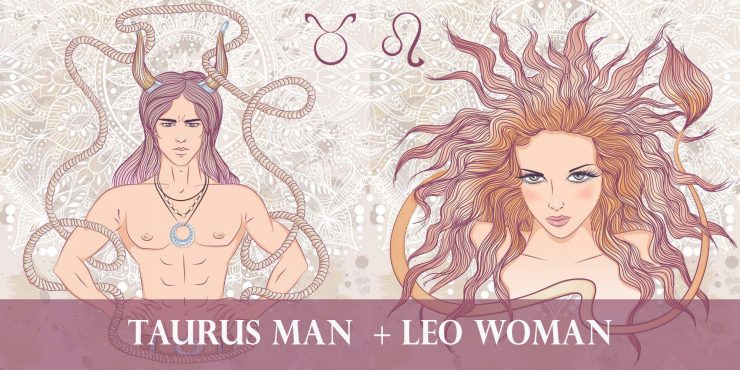 A couple of Taurus man and Leo woman – is the union of a reliable stable man and an energetic gorgeous woman. The Leo woman seeks to fill their life together with new colors, to make it brighter. For her, the care of a man is very important, his ability to provide for her. And the Taurus man for the sake of the happiness of his beloved will make every effort to realize this as fully as possible. The Leo woman, for all her brightness and love for universal admiration, is a faithful wife, a wonderful mother, and a wonderful hostess. However, her man should show how highly he values her. For a female Leo, there are never too many compliments.

Emotional closeness between partners in this union is a difficult issue that threatens their compatibility. When mutual attraction brings them closer and a love relationship arises, then the emotional coldness of the male Taurus becomes a stumbling block.

A Leo woman needs to understand the nature of her man. She needs to be patient and understand that emotional closeness with a male Taurus will be established slowly. And only if he does not feel the pressure. The male partner must learn to trust the beloved woman, open his heart, share his thoughts, feelings, desires with her.

Rose is Leo and Bobby is Taurus. The two met on the Broadway play set in 2012. They are not married, but have two children together. They also work together a lot in movies, plays and TV shows. Apparently, being together at home and while working really bringing them close.

George was Taurus and Brenda was Leo. They have met in Dayton where George did night club comedy shows and Brenda was a hostess, and married in 1961. They were together until her death in 1997. They have a daughter. Brenda helped her husband in his early career and they managed to quit drugs together.

Fred was Taurus and Robyn is Leo. They have met in 1973 when she was riding a horse with her friend and later Fred made a bet on this horse and won. Only four years later they have met again and it was a date. In 1980 they married – Fred was 81 years old and Robyn was 36. She gave up her racing career and they lived quite blissful life. But in 1987 Fred died. Robyn told in an interview that she will never marry again.