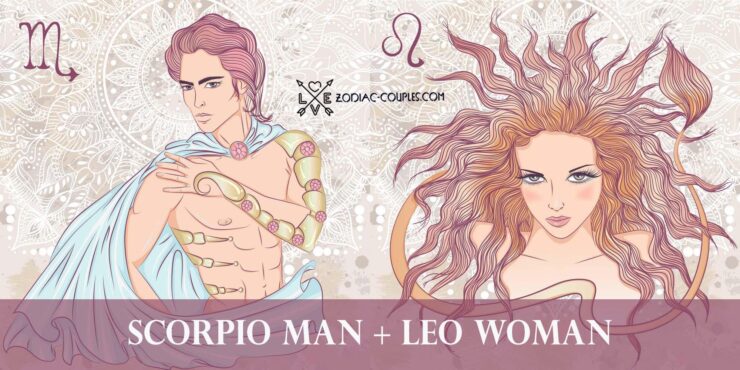 The union of a Scorpio man and a Leo woman has impressive compatibility. Their relationship will be deep and vibrant. Despite the different elements, the zodiac signs have similar temperaments and characters. Although their compatibility is at a high level, partners will have to work hard to build relationships. First of all, this is work on yourself. Scorpio and Leo need to learn to compromise with each other, build communication on mutual understanding and avoid competition and enmity, which will not be easy because both zodiac signs have a strong character and strive to dominate.

A spark between partners appears literally from the first meeting, followed by the rapid and passionate development of relations. However, do not rush. Behind the storm of emotions, it isn’t easy to understand whether your person is really there. To avoid future conflicts, partners should put their feelings aside and rationally take a serious step. For marriage, Leo woman and Scorpio man should discuss their future family and distribute responsibilities. It would be best if partners also took care of finances because, for both signs, comfortable life is significant. In the case of a breakup, partners maintain a good relationship since they treat the ex no longer as a lover but as a family member.

Bill is Scorpio, and Melinda is Leo. The couple met in 1987 when Melinda came to work as a manager at Microsoft. The meeting happened during her business trip to New York at the dinner, but nothing further progressed. A couple of months later, they met in the parking lot at Microsoft, and Bill asked her on a date two weeks later, to which she said that he was not spontaneous enough for her. He called an hour later, and they had a great date. The partners confessed their love to each other a year later and realized that the relationship should either develop or end. Bill was not overly romantic and made a list of the pros and cons of their marriage. The result was their secret wedding in 1994. They have three children, the couple is engaged in charity work and business.

Unfortunately, in 2021 they announced a divorce, because they believed that can’t “grow together as a couple” no more.

Rebecca is Leo, and Eric is Scorpio. The couple tied the knot in 2004, after ten months of dating. They have two children together. In 2018 Rebecca filed for divorce. The partners made every effort not to divulge the details of their personal lives, but the 14-year marriage fell apart. In the divorce papers, Rebecca indicated the reason as irreconcilable differences. She also applied for joint custody of children and financial assistance from her husband. It is known that partners do an excellent job with joint parenting, they have no conflicts, and the separation was friendly. Eric struggled with depression and was addicted to prescription drugs.

Jaime is Leo, and Eric is Scorpio. They have been friends since 1996, but their friendship grew into something more, and the couple began dating in 2004. After they found out that Jamie was pregnant, the partners got engaged in 2006. The partners broke off their engagement and broke up in 2008. According to Pressly, after Eric’s career began to develop and he had to travel a lot, their relationship began to decline. She was pregnant at the time and lacked his support. They broke up, but Pressly does not consider herself a single mother, as Eric spends a lot of free time with his child when he is in the city. She also mentioned how hard it is to part with a person who has been in your life for so long, but they began to live separate lives, and there was simply no point in continuing such a relationship.