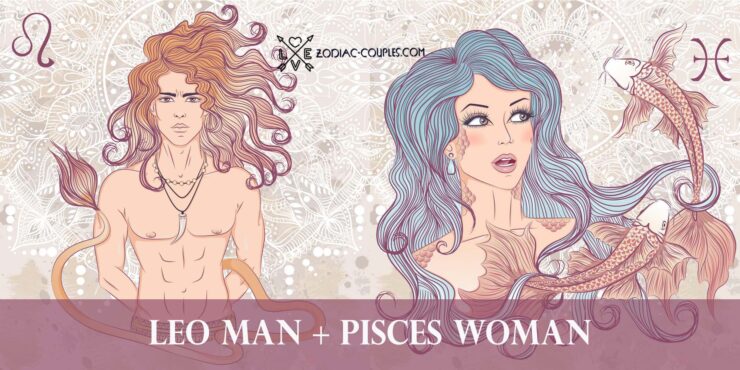 The union of a Leo man and a Pisces woman usually does not last long. A chance meeting of these zodiac signs usually triggers love chemistry in both. The Pisces lady quickly falls in love, but her shyness and insecurity prevent her from taking the initiative. Therefore, the future of the couple lays on the shoulders of the Leo man. He is attracted by her secrecy and mysteriousness, while his confidence and dedication attract a woman. These zodiac signs are complete opposites, so they are interested in each other. A woman sees in a man an example to follow and tries to adapt his positive qualities. She does this only with the best intentions. However, Leo appreciates and protects his personal space and regards this lady’s behavior as an obsession. It will irritate him, and annoyance will only grow. A woman, on the contrary, does not see flaws in a man.

A marriage between partners can only last long if it is a conscious and thoughtful decision. If they are in a hurry or too young, the love will pass, and the couple will divorce. To maintain a positive mood between these zodiac signs, partners need to learn mutual respect and understanding, discuss their dissatisfaction and problems, and find common things to do.

Nikolaj is Leo, and Nukâka is Pisces. The couple met in 1997 while working on a radio play. Nikolaj fell in love at first sight, and Nukâka insisted on a professional relationship and was not in the mood for romance. He had to be persistent and annoying while she needed time. In 1998, the couple tied the knot. They have two daughters together. Partners do not follow each other’s professional success. This does not mean that they do not support each other, but work for them is work, and a partner is a person when in a family.

Sophie is Pisces, and Joe is Leo. The couple met in 2016. Their mutual friends insisted on their meeting. The two started chatting on Instagram and went on a date a couple of weeks later. They immediately felt that this was a special connection. The couple kept their relationship secret for a long time, but the paparazzi repeatedly caught them together. At the end of 2017, Sophie was spotted with an engagement ring, and the couple got married 2 years later. In 2020, the couple had their first child together. Sophie says her relationship with Joe helped her overcome her depression. They are doing well now and expecting second child in 2022.

Drew is Pisces, and Tom is Leo. The couple met in 1999 on the set of Charlie’s Angels. They dated for a year and got engaged in 2000. That same year, Tom was diagnosed with testicular cancer. It was a difficult time for the couple. They married in March 2001, and Tom filed for divorce in December, citing irreconcilable differences. The divorce was finished in 2002, and the couple’s communication completely stopped. The first meeting of partners since that time happened in 2020 when they gave interviews together. The couple did not reveal the reason for the sudden separation.

David is Leo, and Tea is Pisces. The couple met in 1997 when they auditioned for The Tonight Show. A spark appeared between the partners. They had a nice conversation and soon started dating. They dated for eight weeks and tied the knot in May 1997 in an intimate ceremony. The couple has two children together. In 2008, the union announced the separation due to David’s sexual addiction. Tea tried to help her husband and insisted on rehabilitation. The couple reconciled and decided to try to restore the marriage, but it was not for long. In 2011, the couple broke up again but filed for divorce only in 2014. They no longer tried to make up.

Vanessa is Pisces, and Rick is Leo. The couple began dating in 1999 and got married while on vacation in the Caribbean, later repeating the ceremony with their loved ones in New York. At that time, Vanessa already had three children from a previous marriage, and in 2000 they welcomed a daughter together. Their happiness did not last long because, in 2004, Rick filed for divorce without first talking to Vanessa. It was a shock for her, but since they are parents, the priority was that divorce did not become a trauma for the children. The partners split up peacefully and maintained friendly relations.

Talia is Pisces, and John is Leo. The couple got married in 1998 and have one son together. John says he is fortunate enough to have met his wife. The secret of their marriage is that they are comfortable together and cozy. They feel and understand each other. Although John is a successful and demanded actor, he is more pleased with his husband and father role than the awards he received. He says that for him, the most important thing in life is family and friends.

Michael is Leo, and Khatira is Pisces. The couple met in 2008, and after four years of relationship, they decided to get married. They now have two children. Before meeting her husband, Khatira worked as a waitress and performed on TV shows a couple of times, but she decided to hide from the public after meeting with her husband. Khatira is not a public person and has devoted her life to her family, and Michael was not against her decision. Now the couple lives together and happily brings up two children.