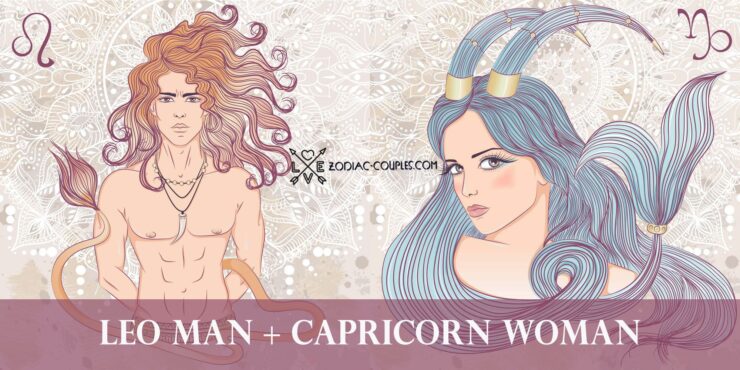 The union of a Leo man and a Capricorn woman is a tandem of two strong, bright, hardworking, and independent personalities. It is believed that it will be difficult for partners to find a common language in love, especially in marriage, since their temperaments and outlook on life are very different. However, complicated does not mean impossible. Their personalities will attract a couple from the beginning and make them take action towards each other. These zodiac signs are very clever and intelligent, so their conversations will always be on in-depth topics.

The marriage of a Leo man and a Capricorn woman can definitely be successful. Both partners are leaders and independent, so everyone will try to build their own careers and achieve heights. However, in this race for success, it is essential not to forget about the soulmate because marriage cannot exist on its own if you do not work on it. Partners should learn acceptance, the ability to negotiate and find compromises, as well as forget about their egos.

Zooey is Capricorn, and Benjamin is Leo. The couple got engaged in 2008 and tied the knot a year later. Zooey and Benjamin seemed to be one of the sweetest couples in Hollywood and never let strangers into their family and personal relationships. Not surprisingly, the news of their separation and that Zooey filed for divorce in 2011 shocked the public. The divorce was finalized in 2012, and we can only guess about the reason. The only thing that the partners understood for sure is that you need to continually work on the relationship and compromise because nothing will work correctly by itself just because the right person is nearby.

Lyndsy is Capricorn, and Noah is Leo. The couple met on the set of Nikita. In 2016, Noah proposed to her. Initially, he wanted to present her his great-grandmother’s ring, but later they decided to order the ring from the jeweler. By the end of the year, the couple got married, carefully preparing their wedding ceremonies, and two years later, they welcomed their daughter. It took them a couple of years of working together to fall in love, but after realizing that he was in love, Noah followed his deceased father’s advice and decided not to miss out on such a wonderful person as Lyndsy.

Imelda is Capricorn, and Jim is Leo. The couple met in 1982 when both were working on the play Guys and Dolls and started dating. It did not take them much time to think, and the next year the couple tied the knot. The pair welcomed one daughter during their 38-year-old marriage. The union of Imelda and Jim is the personification of a happy family and marriage. Partners are getting old together and grumble about new technologies they do not understand. That’s their type of happiness.

James is Leo, and Suzy is Capricorn. The couple met on the set of Titanic. James was already in a serious relationship at that time, but meeting Suzy shook his faith. He started dating her but continued to choose between two women. He still chose his ex, returned to her, and even got married, but the marriage did not last long. He divorced and decided to return to Suzy finally, married her in 2000, and never separated. The couple has three children. In their marriage, they have been comfortable together for over 20 years.

Andy is Leo, and Joanna is Capricorn. The couple met through a mutual friend and started dating in 2008, but Andy was in love with her even before they met, attended her concerts, and admired her work. After five years of relationship, the couple tied the knot in 2013. Joanna also supports her husband and is proud of his success. In typical Andy’s comic style, the wedding took place, where stand-up comedians performed and joked about the couple. The union has a daughter who, from an early age, takes an example from mom and dad and also wants to be a musician and perform.

Michelle is Capricorn, and Barack is Leo. They met in 1989 when Barack joined Michelle’s company, and she was made his mentor. He offered several times to go on a date with her, but she refused. He did not attract Michelle, and she preferred to spend time making a career. In the end, she agreed to go on a date, after which she fell in love.

In 1991, the couple got engaged and tied the knot a year later. The pair has two children. In 2004, Obama started an active political career, and in 2008 he became President of the United States. The family spent 8 years in the White House, and during this time, they became an example of love, family, kindness, and honesty for all of America. After her husband’s presidency, Michelle took up her book, in which her husband actively supported her.