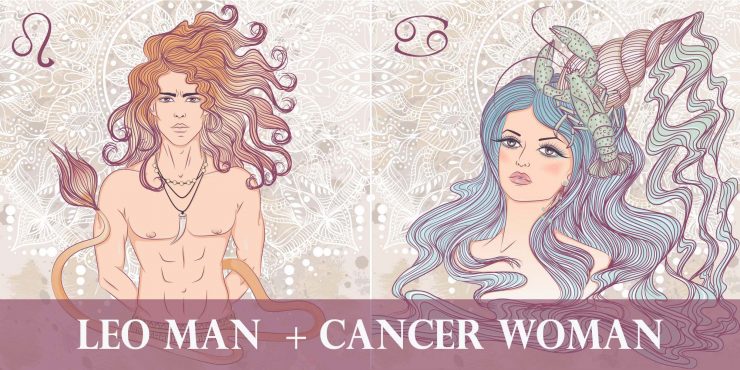 These people are opposite to each other, they can never change each other or have an influence on a partner. But between them there will be the most fruitful and harmonious union imaginable. After all, they are the embodiment of the energy of two luminaries, the Sun and the Moon. Like their cosmic counterparts, they do not intersect in characters, but they need each other for harmony.

In the perfect pair of Leoman with Cancer woman, everyone can realize their best features. Leo is a real man: confident, strong, generous and cheerful. Cancer is a true woman: soft, gentle and mysterious. Even if their characters and views do not coincide, they easily adapt to each other, because they just need to be themselves.

Chris Hemsworth is Leo and his wife Elsa is Cancer. As they both say, they put a lot of efforts to make their relationship work and to grow together as professionals in their carriers. Nevertheless, their love is shining through wherever you see them, so this union seems to be perfect. Chris and Elsa have 3 children and they take the time for family despite hot working schedule.

Steve is Leo and his wife Nancy is Cancer. They are both comedy actors and they have more in common. Having mutual feelings, they married in 1995 and have been together ever since. They have two kids and sometimes work on same projects. Whenever Steve talks about his wife it’s something nice and warm. Another perfect couple, if you ask me!

Roman Polanski is Leo and Emmanuelle Seigner is Cancer. They married in 1989 when Roman was 55 and she was just 22. People didn’t expect them to survive together till today, but here we are – couple has two kids and seems to be happy. Emmanuelle is self-sufficient actress and she is very supportive of her husband whatever scandals follow him and whatever difficulties they go through.

Lara is Cancer, and Sam is Leo. The partners started dating in 2013, and not to waste their time a year later, the couple decides to get married in an intimate secret ceremony where there were only up to 10 relatives. At the time of their wedding, Lara was already six months pregnant with their baby. In total, the union welcomed three children in marriage, and all of them are boys. They have a very private lifestyle and prefer not to talk about any facts about their family and only occasionally delight the public with joint photos.

Tom is Leo, and Gisele is Cancer. When the two first met in 2006, Tom was still in a relationship, but the meeting turned out to be something special, and he soon broke up with his then-girlfriend. For Gisele, it was love at first sight. In 2007, the couple began to date officially. In January 2009, they got engaged, and in February, they got married in an intimate ceremony. The lovers welcomed their two children in marriage. Their relationship and family life haven’t always been easy. There were rumors about their divorce; at the beginning of the relationship, Tom’s ex-girlfriend said that she was pregnant with him, there were misunderstandings between the partners. However, they managed to overcome it all through the established communication with each other.

Other famous Leo and Cancer couples

They began dating in 1977 and were unofficially married in 1990. The couple has 4 children. Due to Mick’s infidelity, they broke up in 1999, although there were a few times before when Jerry was leaving him. Now she says that he is a womanizer who quit drugs but traded them for sex.

They married in 2014, but they have known each other for six years already and split in 2019. The couple was very private about their lives, so we only know that they are both workaholics, they collaborated on a few projects together. It’s not even clear if they are officially divorced.

They have married in 1961 and have four children. Martin says he is lucky to be married to a woman who always stands with the truth. She is with him despite his hard times back then when he was an alcoholic and troubled man.