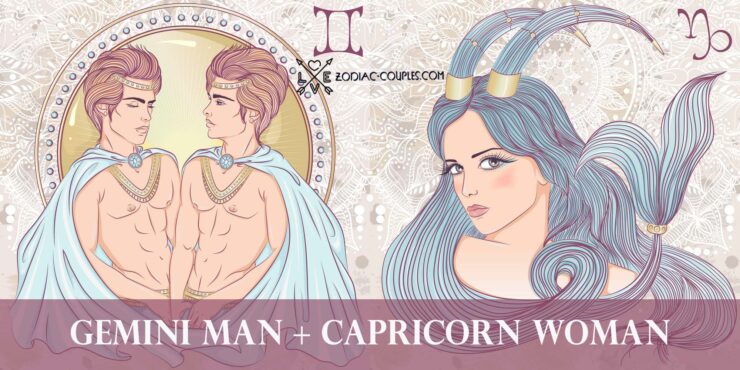 The Gemini man and the Capricorn woman are a union of two opposite personalities that have nothing in common. Opposites attract if they complement each other, but this is not the case. The Gemini man is not serious; the boy, in his behavior, occasionally tries to seem like a mature man. The Capricorn woman is serious, wise, pragmatic, and purposeful. These contradictions cause excitement in partners from the first meeting.

The woman behaves coldly towards the man, which attracts him into the game. On the one hand, she may not be interested in his nature, which requires entertainment. On the other hand, she wisely and cunningly manipulates him. The man is trying to find the point where the woman will melt and let him come closer and use all his natural courage and attractiveness. The more energy he puts into her, the more he falls in love.

These zodiac signs also have different approaches to marriage. Although Gemini is in no hurry to get married, Capricorn will be able to direct him in the direction she needs. In these relationships, the role of adult and responsible will go to the woman. At the same time, the man will continue to behave infantile. Relationships can work out and even quite well if Gemini becomes wiser and more conscious. Still, even then, the woman will lack reliability and support from him. She will always be mentally stronger.

Johnny is Gemini, and Vanessa is Capricorn. The couple met in 1998 at a dinner party at the Costes Hotel. Vanessa impressed Johnny from the first meeting. A year later, they had a child together. They had two children in total. They were not married, as they did not see the point in a piece of paper to confirm their love. But Depp said that if it were essential to Vanessa, he would marry her. This couple was iconic in their time and set the level for everyone else. They broke up in 2012 by mutual desire but remained on good terms. The reason was their busy work schedules, which interfered with the everyday existence of relationships and family. Vanessa has always treated Johnny well and testified in his defense during the trial with his ex-wife, divorced in 2017.

Paul is Gemini, and Heather is Capricorn. The couple met in 1999 at a charity event after Paul’s wife passed away from cancer. They got engaged in 2001 and got married a year later. They had one child in their marriage. Heather said that she offered Paul to sign a marriage contract to prove that she was with him because of feelings and not because of money, but he refused. In 2006, the partners decided to split up, and their divorce was finalized in 2008. Initially, they parted by consensus, as it was difficult for them to cope with the paparazzi’s attention and pretend that everything was fine. A possible reason for their divorce could also be Heather’s bad relationship with Paul’s daughter from a previous marriage.

Alison is Capricorn, and Dave is Gemini. In the spring of 2011, friends introduced them to each other. They had a good time and parted. During the second meeting in the fall, Dave suggested that Alison go to Paris with him, and she agreed. Then their relationship began. They tried to make each other pleasant things, threw surprise parties, appeared together in public, and starred in a video. The couple got engaged in 2015 and got married two years later. The union is still only planning children, but the relationship has benefited as a fertile work on several films.

Kate is Capricorn, and Jefferson is Gemini. In 2001, the two met when Jefferson was interviewing Kate for Dazed and Confused magazine, after which they began dating. Until the end, it is not clear how he attracted her because it is known that his first words spoken to Moss were “You smell like pee.” Either way, their strange relationship led them to greet daughter Lila Grace in 2002. The partners were not married, and their union did not last long, since, in 2005, Kate was already in a relationship with another man. The partners parted peacefully and, to this day, maintain communication.

Zooey is Capricorn, and Jacob is Gemini. The couple met on the set of Rock the Kasbah around 2014 and in 2015 announced their engagement. The wedding took place in June of the same year. They have two children together. In 2019, the couple split up, and nine months later, Jacob filed for divorce, pointing out irreconcilable differences. He also applied for joint custody of children. The divorce was finalized in June 2020. After announcing the separation, both partners went to build their personal lives and entered into other relationships. Their union didn’t work for them, and both decided not to waste time and move on.

Daryl is Gemini, and Meghan is Capricorn. They first met at a house party in 2014. She was impressed by the fact that she met her childhood star and he could not forget this blonde. Their next meeting took place in 2016. They were then brought together by their mutual friend and went on a double date, which was successful. In 2017, the couple got engaged and got married a year later. At the end of 2020, the happily married announced that they were expecting their first child. We wish them all the best and continue in the same spirit.

Other Gemini and Capricorn famous couples