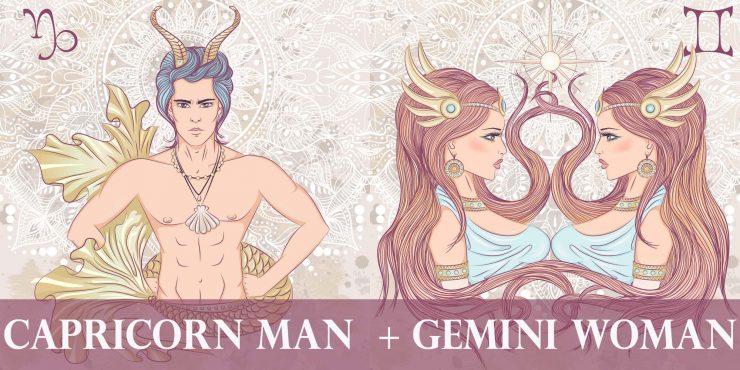 Capricorn and Gemini have a different approach to life. Capricorn is calm, purposeful and always knows what he wants. Gemini is superficial, live easily, and often do whatever comes to their minds without planning anything in advance. A Gemini woman can be bored with Capricorn – he does not like impromptu, plans the course of the date in advance, is silent. He seems to her like a dry and unromantic person. Capricorn hates disorder in everyday life, in thoughts, and feelings, so the Gemini is too crazy and disorganized for him. Gemini wants a lot, new and interesting things, and immediately. Capricorn loves to slowly grasp the essence and do one thing. Therefore, the couple is deprived of an element important for a strong relationship: common interests and hobbies.

The Capricorn man and the Gemini woman are a rather strange combination from the point of Zodiac compatibility. The mutual influence of both halves on each other will either change the partner or exhaust him. But the Zodiac’s advice is simple. The Capricorn husband needs to try not to cut off the oxygen of his beloved Gemini. A woman should have a purely personal space where it is convenient for her to communicate with sociable and cheerful people. These wives are able to stir up Capricorns and make them happy. The Gemini themselves should realize that the Capricorn husband is a good head of the family, he will constantly worry about material well-being and maintaining comfort. Look for such spouse! Only it is better not to rush with having children, but first get used to each other well. This is the only way Capricorn and Gemini can get along under one roof, their compatibility in love will be hard-won, but long-lasting.

During this period, the couple experienced a lot. Their romance was one of the most talked-about in the press, many did not believe in the seriousness of this relationship.

He helped her get through the most difficult period of her life when Kylie was fighting cancer. In interviews, Kylie has repeatedly told how difficult it was for her at the time and how grateful she is for Olivier’s support. When they broke up, the tabloids accused Martinez of infidelity, which allegedly caused the breakup. But Kylie then defended the ex-lover, emphasizing that the decision to break up was mutual, and they remain close friends.

Later, in 2018, when Kylie left her fiance and Olivier divorced Halle Berry, they met again and sparked rumors about the new romance. Apparently, that was just friendly meet-up, because there is no information, that they restored their romantic relationships afterward.

Jude is Capricorn and Sadie is Gemini. They have met (surprise, surprise!) on the movie set in 1992. Sadie left her husband because of the attraction she felt for Jude and they got together.

But because of Jude’s rising career it was a difficult period. In 1996 their son was born and she got in hospital because of post-natal depression. In 1997 she and Jude got married. They had two more kids and faced more marriage problems.

After many of Jude’s affairs, the couple ended their relationship in divorce in 2003. After tense two years of negotiations, in 2005 the couple reached a settlement.

David is Capricorn and Jordyn is Gemini. They have met in a bar in 2001 and dated two years before their wedding in 2003. They have 3 daughters together and seem to be a very happy couple.

Jordyn supports her husband in his work, without obstructing to long tours and studio recordings. And although in his youth Grohl changed partners with enviable regularity, thanks to Jordyn he turned into a caring father and a responsible family man.

Danny is Capricorn and Gia is Gemini. They have met at Superbowl party in 2002, at that moment Danny was going to give up on L.A., but apparently that girl changed his plans. They dated till 2010 when they finally got married. Now Danny and Gia have two kids, sometimes work together and live a happy family life.

Other Gemini and Capricorn celebrity couples