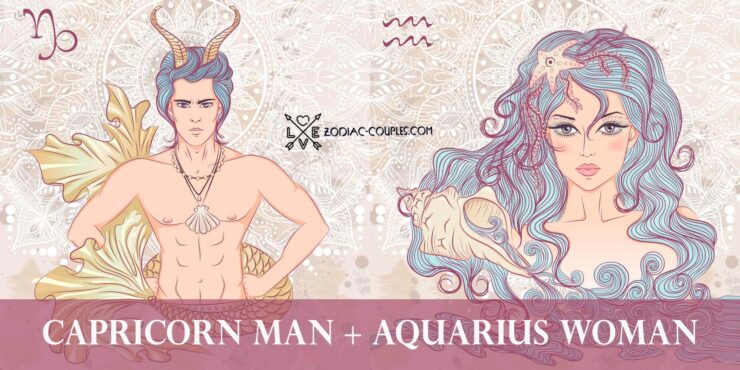 The Capricorn man and the Aquarius woman are attracted from the first meeting, which is not surprising. Both signs of the zodiac are patronized by Saturn – the planet of mystery. Their relationship will develop beautifully, and the logical conclusion will be marriage and children. The Capricorn man is very strict and is characterized by limitations in everything. The Aquarius woman is more inclined towards new experiences, ideas, freedom, and impressions. It is on this basis that a couple’s disagreements and relationship problems can arise.

A man will try to restrain a woman in her manifestations. She is more romantic and open to everything, but Aquarius has her own beliefs, and her actions do not fit into his picture of the world. He will press; she will resist. When the zodiac signs understand that their eternal struggle has no meaning and begin to draw closer, harmony and tenderness will come in their relationship. They will be able to build stable, long-term, and trusting relationships.

Adriano is Capricorn, and Claudia is Aquarius. The couple met on the set of the 1963 film Uno Strano Tipo. Celentano, at that time, already had a reputation as a womanizer, so Claudia chose to keep her distance. She did not accept his courtship until the accident when a light bulb exploded and injured Celentano’s face. After that, she agreed to go on a date with him. He gave her a ticket to his concert in the front row and publicly confessed his feelings. The couple got married in 1964. They have welcomed three children and have been together for over 55 years.

Patrick is Capricorn, and Jill is Aquarius. They met in 1994 when he signed up to her salon for a haircut. He was going to her to get a haircut for three years, and their communication did not go further than jokes. She then met with someone, and he was going through a difficult divorce from his then-wife. In 1997, they started dating and three months later began living together. In 1999, the couple got married, and this is how their family history began. The union welcomed three children. Saving the marriage is a big job, and in 2015, Jill even filed for divorce, but in the end, they managed to fix everything.

Tiffani is Aquarius, and Brady is Capricorn. They started dating in 2003. Two years later, the couple tied the knot in the circle of close friends and family. In the marriage, the partners greeted two children. In 2020, on their 15th wedding anniversary, Tiffani and Brady decided to renew their vows in a cozy ceremony. Even after so many years of marriage, they cannot imagine their life with someone else and love each other every day more and more.

Ted is Capricorn, and Mary is Aquarius. The couple first met in 1994 on the set of the film Pontiac Moon. At that time, Mary already had two children from a previous marriage. At first, they had preconceived notions about each other, but that soon changed. Their wedding in 1995 was a real highlight. 150 celebrity guests were invited to the wedding. Since the couple met when both were already over 40, they do not have joint children in marriage. They met at the right time for both, which helped them cope with personal dramas.

Other Capricorn and Aquarius famous couples