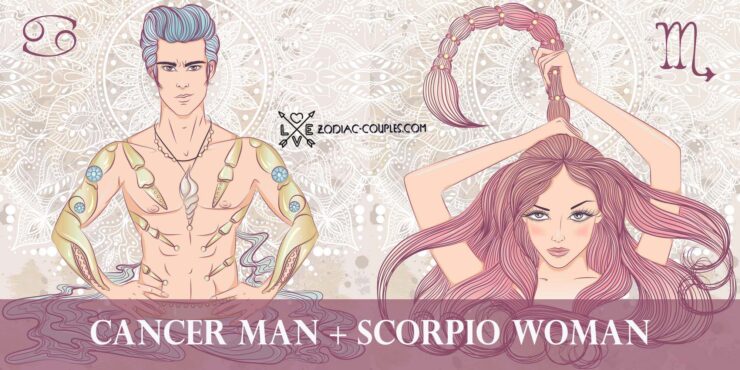 The Cancer man and the Scorpio woman are very well suited to each other; their relationship will be long and deep. The partners get along so well that it seems that fate itself worked hard to ensure that they were together. Both zodiac signs belong to the element of water. It seems that for them, there is nothing that they cannot cope with. Their characters are perfectly comparable since there are no contradictions. What one does not like – the other does not need at all. They share principles, outlook on life, and hobbies.

Even though Scorpio is considered the most passionate sign of the zodiac, there will be tenderness, care, romance, and dreams between partners. They do not hesitate and often quickly go over to cohabitation since they immediately determine whether a person is suitable for them or not. Of course, there are no quarrels without fights. Still, partners value relationships so much that they know how to solve problems wisely. Scorpio woman often avoids conflicts due to her intuition.

Cancer and Scorpio are very jealous signs. A woman can begin to suspect for any reason. Still, a man is monogamous and does not even think about cheating. Excessive suspicion from a lady may seem to him a sign of cheating.

Harrison is Cancer, and Calista is Scorpio. The couple met at the Global Clobes in 2002. They started dating when Harrison was in the process of divorce from his wife, and that’s why the two kept their relationship quiet. Finally, they tied the knot in 2010. Ford became a step-father to Calista’s son that she adopted a year before their meeting. The secret to the success of their long relationship is love, laugh, humor, and unconditional support.

Tom is Cancer, and Rita is Scorpio. The couple met in 1981 when Tom starred in Bosom Buddies, and Rita was a guest star in one episode. In 1985 they starred together in Volunteers, but there was just friendship between them since Tom was still married to his first wife with whom he has two children. Hanks didn’t wait for legal divorce from his wife, and after separation, debuted as a couple with Rita in 1986. Two years later, they got married. They have two children together.

It would not be fair to say that their life was a fairytale. Wilson was diagnosed with breast cancer, and they fought together; in 2020, the couple had COVID-19. Although they worked together, created projects, inspired each other on achievements, and had a great time. We wish them more happy years in their beautiful family.

Jan is Cancer, and Frances is Scorpio. They tied the knot in 1992. The two have a solid marriage full of love and visit social events and awards show together. The couple has no children in their long relationship, and Frances is often asked about this fact. As she explained, her childfree position is that every woman has ever been a mother for someone in her life. In Conroy’s case, it was her mother with dementia. However, the couple feels good about that and has no regrets.

Nick is Cancer, and Megan is Scorpio. The couple met in 2000 when they acted in the play The Berlin Circle. As both of them note, it was a connection from first sight. They started dating in 2001, even though Megan is 12 years older. After 18 months of dating, the pair tied the knot. They are still happily married. Their relationship’s main rule is that they don’t spend more than two weeks apart, and it works. They tried to have children, but because of Megan’s age, they failed. There are no issues about that between them.

Scarlett is Scorpio, and Romain is Cancer. Their mutual friend introduced them. The two started dating in 2012 and the next year got engaged. The couple welcomed their daughter together in 2014 and, in October, tied the knot. The details of their personal life and wedding have always remained secret. Scarlett shared that she had to live in two cities: Paris and New York. In 2016, the couple announced their separation, and the divorce ended in 2017.

However, later Scarlett met another Cancer man – Colin Jost ❤. The couple first met in 2010 on the set of Saturday Night Live, where she hosted, and he had written a sketch to. Their reunion was in 2017 at a cast party of SNL where she appeared. A few months later, the two started dating. In 2019 they got engaged and tied the knot in 2020. The partners did not disclose the details of their personal lives but delighted the audience with joint appearances at awards and film premieres. Scarlett says that Jost is the love of her life.

Emma is Scorpio and Dave is Cancer. The couple first met in 2016 while working on the skit Wells for Boys. In the summer of 2017, a fan-filmed video of the two leaving the premiere of Brigsby Bear together and rumors began to surface that they were dating, but there was no official confirmation. Until 2019, the union was noticed on dates and parties, but only in January did they debut on the red carpet. At the end of the same year, they shared their engagement news on Instagram. Their wedding was scheduled for March 17, 2020, but it had to be postponed due to the pandemic. The partners got married in a super-secret ceremony and were later seen wearing rings. In the spring of 2021, they greeted the baby and did not reveal their pregnancy until the very last dates. We wish the young family all the best.