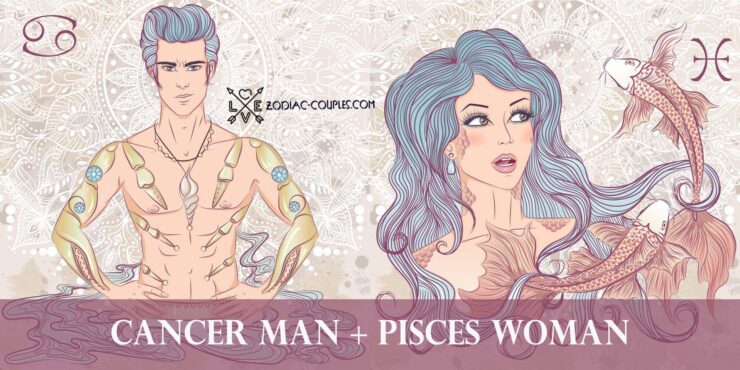 The Cancer man and the Pisces woman have impressive compatibility in sex, relationships, marriage, and even work. These zodiac signs relate to the element of water, which determines their values ​​and view on life. Partners have absolutely identical ideas about ideal relationships: deep, gentle, trusting. A relationship in which they can be themselves and in which they feel secure.

Partners feel incredible attraction from the first meeting and the first eye contact. They immediately think of the chosen one as their fate, and often their relationship develops very quickly. Partners are not looking for benefits in a relationship, so a marriage of convenience is an exceptional rarity among these signs.

The union of the Cancer man and the Pisces woman is long, deep, and strong, and their secret is in a common goal. They really have the same temperaments, beliefs, hobbies, needs, and also dreams. They look in one direction, walking side to side through life. Conflicts between partners are also rare since both signs have good intuition, and if something goes wrong, they feel it in advance and take action. Mutual understanding reaches the level when they do not need to talk a lot. They see everything in the eyes.

Elon is Cancer, and Grimes is Pisces. The couple met via Twitter when two made the same nerd joke. Their first debut as a couple was at the Met Gala 2018. It seems they separated for a month, and as Grimes later commented, she was not ready for such public attention that comes with this relationship.

They welcomed their mutual child in May 2020 and gave it the name X Æ A-12. There is no news of their separation; however, partners follow and unfollow each other all the time. Elon makes provocative statements on Twitter, which confuses the public. He also stated that he does not take part in caring for the child now since he has nothing to do with him. Perhaps he will join the parenting process later.

Benedict is Cancer, and Sophie is Pisces. The couple met in 2009 on the set of Burlesque Fairytales, but he was in a relationship at that time. They started dating in 2013. The duo’s engagement was announced in The Times in 2014, and they tied the knot on the day of praising love on February 14 in 2015. Benedict and Sophie have two sons together. The two are low-key and fight for privacy in their life, but even those not interested in Cumberbatch person see how happy he is with his wife.

Will Kopelman and Drew Barrymore 💔

Will is Cancer, and Drew is Pisces. The two started dating at the beginning of 2011 after Drew’s split up with Justin Long. They got engaged in January 2012 and a couple of months later tied the knot. They have two children together. Drew was amused with Will being a father and thought to give up Hollywood to raise her children.

However, they announced their separation in 2016. The same year Barrymore filed for divorce, and it was officially finalized. The reason is that they were like different poles and couldn’t agree. They are not a couple anymore but still are a family.

Lily is Pisces, and Charlie is Cancer. They met in early 2019, and at the first moment, Lily realized that she wants to be his wife. They made it official by posting the photo on Instagram in August 2019. COVID lockdown 2020 had a positive impact on their relationship and brought them closer. In September 2020, Charlie proposed to Lily, and she couldn’t say “No” since he is the love of all her dreams and life.