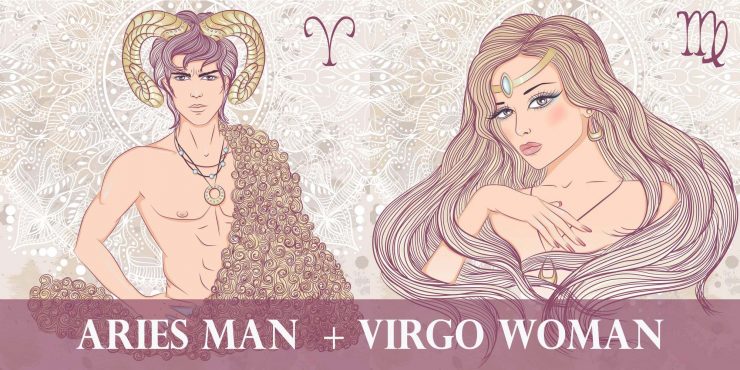 It is not always easy for a Virgo woman and Aries man to find a common language. Aries lacks a certain “flavour” in a relationship, and Virgo is sickened by excessive emotionality.

The main problems of the relationship between the Aries man and the Virgo woman arise at the junction of their elements – the Earth of Virgo and the Fire of Aries. The earth extinguishes the flame, and the fire destroys the earth. It is very difficult to build harmonious relationships on such a mutually exclusive basis. Aries man hates female puzzles and riddles, understatements and hints. He is sure that these are tempest in a teapot. Why beat around the bush when you can speak directly and not look for subtext between the lines. He can incinerate Virgo for making it difficult for him to go deeper into the analysis of relationships.

Heath was Aries and Michelle is Virgo. They’ve met on the movie set in 2004 and fell in love instantly. Next year they welcomed their daughter and both tried to be good parents, Heath told that family is everything to him. Unfortunately, it didn’t last long – he began to “party hard” and use drugs and Michelle started to reevaluate things. They split in 2007 and in 2008 Heath Ledger died. He and Michelle kept good relations till the end.

Hayden is Aries and Rachel is Virgo. Just like previous couple, after they have met in 2007 while working together, they soon got engaged in 2008, although they have never married. In 2014 their daughter was born. But unfortunately, in 2017 after ten years together, couple decided to part ways due to “their conflicting work schedules” as they said. Although, they keep co-parenting, because their child is precious for both of them.

Eli is Aries and Lorenza is Virgo. They also have met while working! Well, it’s not uncommon in Hollywood. It was in Chile and Eli was impressed with her skills so much that he made a movie for her. They married in 2014 and there is not much information about their life – any scandals, any big titles, but in 2018 they divorced. Surprisingly, they stated that they remain friends and colleagues, love each other and divorced just to be “adult about it”. This is probably the best way to split as a couple.

Jennifer is Virgo, and David is Aries. They have met in early 2008 and later this year David proposed to Jen.

Next year they welcomed a baby. The wedding supposed to happen in 2010, but was cancelled, then again in 2012. In 2014 Jennifer appeared on numerous events by herself. In 2017 an unsurprising breakup finally happened and at that time Jennifer filed an order of protection against David. Only in 2019 they reached an agreement regarding custody of their son.