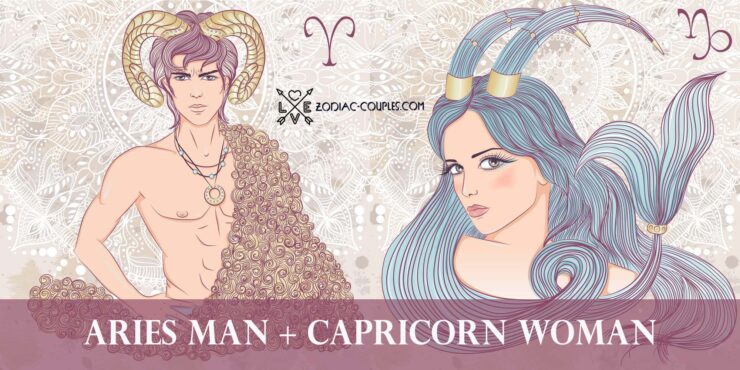 The union of the Aries man and the Capricorn woman can be very long and successful, under the condition that both signs are serious about their intentions. They have different tempers, but in this case, it is a perfect complementary relationship.

Next to Capricorn woman, Aries is revealed as a reliable man, and she can afford to be a fragile woman. Partners know exactly what they want from this relationship and how to get it. Their relationship is also solid, built on mutual respect, have common goals, and go side by side.

These signs of the Zodiac try to know a partner when they meet. They are trying to understand exactly whether this is the person they need and whether they are ready to go with their partner “through foul and fair”. They will find out everything to the smallest detail, from finances in the family, everyday life to raising children. Thanks to this serious approach, these pairs are strong.

David is Aries, and Georgia is Capricorn. The couple met in 2008 on Doctor Who set, where Georgia played the role of David’s character daughter, although in real life he is only 14 years older. In 2011 they got married. David successfully treated his early-stage cancer in 2018, and his wife always was by his side. The couple has five children together and never get bored.

Eddie is Aries, and Nicole is Capricorn. They met in 1988 when she was a popular model, and he was a famous comedian. The couple got married in 1993. They had five children in a marriage, and in 2005, Nicole filed for divorce. After the divorce, a quality relationship was a priority for both since that was crucial to raise their children in a good, loving atmosphere.

Maggie is Capricorn, and Beverly was Aries. They met when Maggie was only 18. That time Beverly was married and promised to divorce, but Maggie didn’t wait for a miracle and married another man.

However, fate brought them together again in 1975 after her divorce. Later that year, the couple got married, and then their long history began. Unfortunately, Beverly died in 1998. Maggie loads herself with work to avoid loneliness, but even so, many years after his death, she grieves for her first and only love.

Julia is Capricorn, and Brad is Aries. The couple met at Northwestern University and, in 1987, tied the knot. They have two children.

In 2017 Julia was diagnosed with breast cancer, and in October 2018, she announced that she won the battle with the disease. Of course, with the support and care of her husband.

From the very first days, Julia and Brad knew that they are a match. After 33 years of marriage, they are still each other’s biggest support and right hand.

Marlon was Aries, and Tarita is Capricorn. Marlon met a french actress on the Mutiny on the Bounty set when she was 20 years old. They tied the knot in 1962, and Tarita became a stepmom for his two children. The couple divorced in 1972 but stayed in each other lives till Marlon’s death in 2004.

Alec is Aries, and Hilaria is Capricorn. The couple first met in early 2011 at a restaurant in New York. Hilaria struck Alec at first sight, and he decided to introduce himself to her. He left her his number, later she called, and they made an appointment. In the spring, they started dating, but they were in no hurry to develop relations, and in the summer, they already began to live together. A year later, Alec proposed to Hilaria, and after a few months, they were married. After her fourth child’s birth, she suffered two miscarriages, and they later greeted two more children. The sixth child was born to a surrogate mother. So a chance meeting in a restaurant turned into the creation of a large and happy family.

Other Capricorn and Aries celebrity couples