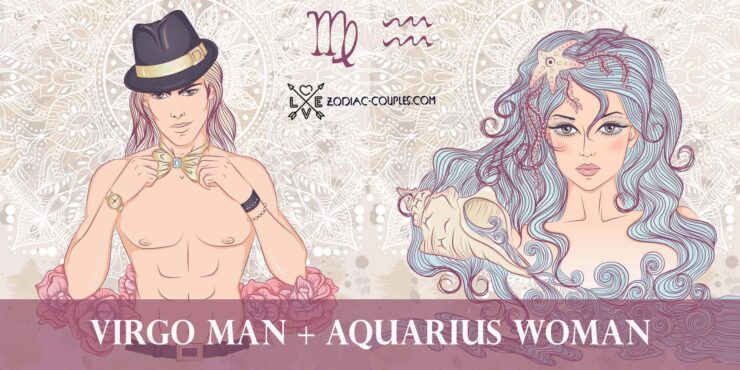 The pair of Virgo man and Aquarius woman is a union of complete opposites. There are many examples where opposites complement each other, but this is not the case at all. To make this relationship work, partners will have to make all kinds of sacrifices constantly.

The Virgo man is the perfect example of pedantry, restraint, rationality. They constantly control themselves and do not show emotions. For them, fidelity, honesty, and concern are insanely important. The Aquarius woman belongs to the element of air. It is explosive, like an atomic bomb, freedom-loving, and completely unpredictable.

General sign compatibility is below average. They could be together if they managed to discern in each other exactly the qualities that they are looking for in a partner. Still, their relationship is more like a father and a small child. Virgo will do his best to curb Aquarius, calm down, and give her some wisdom.

However, there are also positive aspects. Such a relationship is a kind of way out of the comfort zone for both partners. She will bring vivid emotions and variety into his life. He will teach her to take some aspects of life seriously.

Alicia is Aquarius, and Kaseem (known as Swizz Beatz) is Virgo. They met in the ’90s as teenagers when Alicia only started her career. That time, she wasn’t interested in Swizz and couldn’t even imagine being together. However, life is an unpredictable thing, and in 2008 the couple started dating when he was still married. Later, Keys was accused of ruining the family.

The pair got engaged and married in 2010 and now has two children. Their relationship is supportive, both emotionally and professionally. These two always defend each other and love, no matter what.

Rupert is Virgo, and Georgia is Aquarius. The two started dating around 2011 but later separated and reunited in 2017. Their first public appearance was the next year at the Dinard Film Festival in France, but there is no photo of the two since they never pose together. The couple keeps their relationship private from the public eye. In 2020 Rupert and Georgia welcomed their first child – a little daughter.

Richard is Virgo, and Carey is Aquarius. The couple met in 1995 and tied the knot in 2002. They have a son together. In 2013 the couple filed for divorce. It was a huge long battle in court between these two for custody and Gene’s multiple-million fortune. It is known that it was Carey who filed for divorce.

Later Richard met another Aquarius woman – Alejandra Silva ❤️. The couple met when Alejandra was a little girl, and Richard was a friend of the family. They met again in 2014 and felt the connection. It took them four years to decide to tie the knot. The pair also has a daughter together.

Jeremy is Virgo, and Sinéad is Aquarius. The couple got married in 1978 in the outdoor cafe. It was a second marriage for him. Sinéad and Jeremy have two sons together.

This couple is not exceptional, so they also had difficult moments. Jeremy works hard, travels for work, and is completely immersed in his projects. He needs to stay apart even from his beloved wife. At first, when it happened, she thought that something had been done wrong or offended him in some way, but later she accepted his peculiarity.

Hugh Grant is Virgo, and Anna Eberstein is Aquarius. Their relationship is very confusing. Their countdown as a couple begins around the beginning of 2012 since she gave birth to a child with him at the end of the year. Then he reunited with his previous passion, and they had a common child. Hugh and Anna broke up, and their reunion only happened in 2015, when they had a second child together.

Anna became Hugh’s first wife when he was 57. They tied the knot in 2018 and have not separated since then.

Charlie is Virgo, and Denise is Aquarius. The two met in 2000 on the Good Advice set and started dating in 2001. They tied the knot in 2002. Two years later, Denise and Charlie welcomed their first mutual child.

She filed for divorce in 2005, when she was already pregnant with their second child. They separated, but their relationship continued in terms of court issues and public fights. In the end, they stayed in a good relationship, and Denise supported Charlie when he was diagnosed with HIV.

Catherine is Aquarius, and Baz is Virgo. The couple met when she was a student, and got married in 1997. They have two children together. Catherine is a designer. The two constantly work together in the production of different movies. They spend a lot of time together, and that’s why they sleep on separate beds and rooms to keep their marriage alive.

Noah is Virgo, and Jennifer is Aquarius. The couple met in 2001 in Broadway, where she was playing. They tied the knot in 2005 and have a son together. Jennifer filed for divorce from Noah in 2010 and cited irreconcilable differences. The divorce was finalized in 2013.

The pair had worked together on various projects. After the separation, Jennifer moved back to Los Angeles. Both don’t really share the details of their marriage and divorce, just point out that they co-parent pretty well.

Elizabeth is Aquarius, and Boyd is Virgo. The couple started dating in 2012 on the set of Very Good Girls. They got engaged in 2014. However, in 2015, Olsen was spotted without an engagement ring. At first, none of the representatives of the couple confirmed either their engagement or their separation. Still, after a while, Boyd himself began to comment on the separation, which he calls a “divorce.”

It was a tough time for him. On the day he found out about his best friend’s death, his fiancée called and announced the engagement’s dissolution. Boyd went through a difficult time of depression, but time heals, and now he only remembers this time with bitterness.

Emma is Aquarius, and Garrett is Virgo. The couple first was spotted in 2019, right after Emma’s separation from Evan Peters. The two tried hard to keep their relationship low-key and highly private. In 2020 Emma confirmed that she was expecting a baby boy with her boyfriend, Garrett Hedlund and in December they welcomed their newborn. They looked pretty happy on paparazzi photos since that was the only chance to witness them together. However after becoming parents Emma and Garrett realized that they have different life goals. In January 2022 they split.