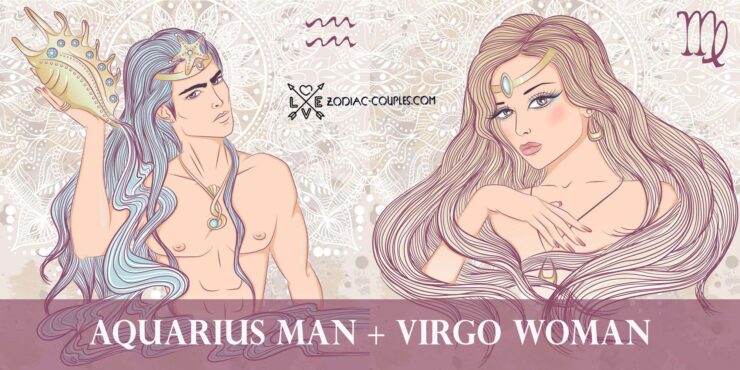 It is not to say that the Aquarius man and the Virgo woman are not compatible at all. Still, they have contradictions with which it is worth learning how to work for both.

First of all, the signs belong to different elements, which already determines their character. The Virgo woman is severe, reliable, purposeful, and pays attention to fundamental things. She is used to solving issues quickly and clearly. On the other hand, the Aquarius man constantly hovers in the clouds. He would have fun, travel, meet friends, and not think about anything much. He puts everything off until the last moment, hoping that the problems will be solved by themselves, and procrastinates. At first, a woman will be amused by his resourcefulness, interesting pastime, and amusement. However, the time will come when she will need reliability and protection and will not get it from him.

Despite these nuances, couples still manage to build long, loyal, and loving relationships. Each union has its own scheme, which they have been developing over the years.

Michelle is Virgo, and Thomas is Aquarius. This couple as a union is pretty young. They started dating right after they divorced with their spouses and then debuted on the red carpet as a pair. Michelle and Thomas announced their engagement later. In June 2020, the two welcomed their first child.

Amy is Virgo, and Kenneth is Aquarius. Irving tied the knot with a documentary filmmaker in 2007. She has a daughter from her previous marriage. Despite her long history of marriages, she is convinced that Kenneth is a love of the whole of her life. They are happy together, and there are no signs of coming to divorce after thirteen years of marriage.

Lea is Virgo, and Zandy is Aquarius. The two met at their friends’ wedding, where she was the bridesmaid, and he was the groomsman. The first mark of the two in a romantic sense was noticed in 2017. Next year there was a huge engagement ring on Lea’s finger. They got married in March 2019, and preferred a chic wedding in California, as chic as a diamond on her finger. In 2020 Lea and Zandy are going to become parents. They are expecting.

Jean is Virgo, and Richard is Aquarius. She met the love of her life on the set of a series Designing Women. It was a quick head-blowing love at first sight. In 1987, the couple tied the knot. Their first child was born in 1989, and in 2009 they decided to adopt one more child from China. It seems that their long love and marriage are never going to fade away. We wish them to be even happier together than they ever were if it is even possible.

Other Aquarius and Virgo celebrity couples