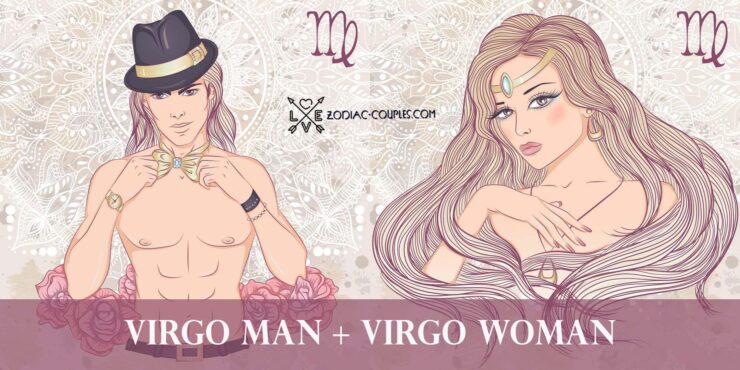 The union of a Virgo man and a Virgo woman cannot be called easy. Relationships between these zodiac signs are possible, but partners will have to work hard to make it work. Man and woman are both materialists and intellectuals; they will certainly have something to talk about. The Virgo’s element is earth, which suggests that the zodiac signs are very stable and down-to-earth people. At first, they will be fascinated by how similar they are with a partner, how their views on life and habits converge. Although they love stability, they can quickly get bored with such monotony. However, they still want unpredictability and brightness in a relationship.

In the early stages of dating, the Virgo woman will be the one who takes the initiative. A Virgo man looks closely at his chosen one for a long time and wants to fight for his attention. However, when he is convinced of his choice’s correctness, he will surround the woman with care and love.

Partners have qualities that will be useful to them in family life. They set goals clearly, calculate the budget, are organized, and logical. They approach the upbringing of children together.

Colin is Virgo, and Livia is Virgo. The couple met on the set of Nostromo in 1996 and started dating. They tied the knot the next year. They have two sons together and one child from Colin’s previous relationship. Their relationship wasn’t perfect. The two separated in 2015, and Livia had an affair. They reunited in 2016. Although, the couple finally decided to go separate ways in 2019 and announced their divorce. They remained good friends and loving parents.

Melissa is Virgo, and Ben is also Virgo. The two met in a writing comedy class in 1998. They became friends from the first meeting and started dating the same year. In 2003 they acted together in Gilmore Girls. Their humor united them, and in 2005 the couple tied the knot. They have two children together. It’s amazing how the partners got along with each other in everything. In addition to a happy family, they also built careers together. The couple starred together in many films, as well as produced and directed films themselves. Ben wrote a book about raising daughters, and it seems this is just the beginning.

Chad is Virgo, and Sarah is also Virgo. They met on the set of the TV series Chosen. Their relationship developed rapidly, and in 2015 the couple tied the knot at a secret ceremony. They have two children together: a daughter and a son. The two are enjoying their family life, developing their careers, supporting each other. They love spending time on the beach together.

John was Virgo, and Amy is Virgo. They met in 1990 while working on the Problem Child movie. Together they worked on several more projects and starred in films together. They got married in 1999. Unfortunately, their marriage was not destined to last long, since, in 2003, John died early from aortic dissection during rehearsals. It was difficult for his wife to cope with the loss, but she did not give up and continued to build a career and personal life.