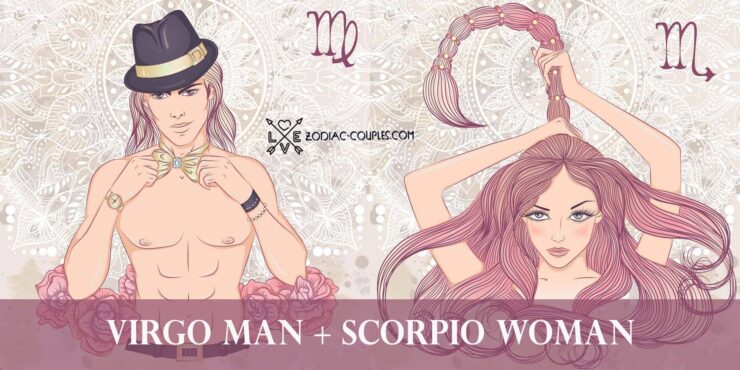 The Virgo man and the Scorpio woman are partners with different temperaments. In this case, we can say that these signs’ compatibility is directly proportional to the strength of their feelings. Scorpio lady is very sensual, gentle, and understanding; she makes a man feel needed and cared for. Virgo is very reliable, pragmatic. Both signs are very stable in their decision regarding a partner, so they usually have a long relationship. Partners quickly begin to see each other as a soulmate. They get so used to each other that they start to copy facial expressions, jokes, habits, and behavior. To those around them, the couple looks like they joined at the hip.

Partners have very similar aspirations in life. Both want coziness, comfort, and success. Signs are very purposeful and achieve what they want; however, in different ways. Virgo prefers to find a logical solution, while Scorpio prefers the most unusual possible solution to a problem.

Rachel is Scorpio, and Jamie is Virgo. The couple is very secretive and does their best to maintain privacy. They met in 2016 and attended a friend’s wedding together as a couple after a couple of months. The press suggests they are engaged. The couple has a common child who was born in 2018. Their privacy policies seem to work for their own benefit. We wish them both happiness and many years together.

Patric is Virgo, and Troian is Scorpio. The couple met in 2009 when they were taking part in a play together. After a year of dating, the couple broke up not on Patrick’s initiative, and he did everything to get his beloved one back. He even auditioned for a show she was on, and it worked. They reunited in 2010. Troian and the star of Suits got engaged in 2014 and got married two years later. In 2018, they had a daughter.

Rupert is Virgo, and Dervla is Scorpio. The pair met in 2001 on the Dangerous Corner set. It took them three years of dating to get engaged. Their wedding took place in 2007 in a small private ceremony for the closest ones. Rupert and Dervla happened to work together in 2005, and they definitely enjoyed the process. The couple has a tender and loving relationship. In their marriage were born two children. The two look happy together. It was that rare case when there were no divorce rumors around them.