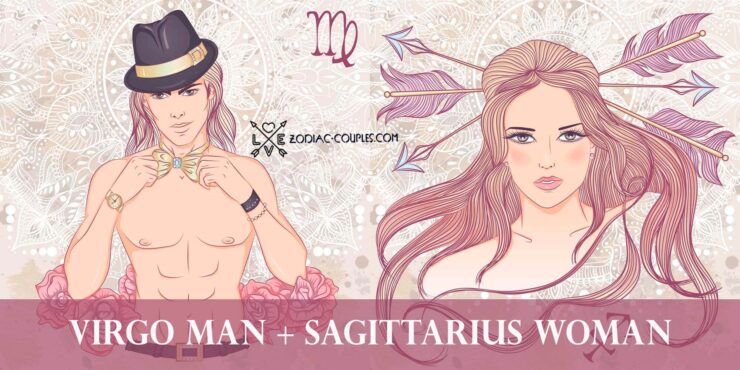 The Virgo man and the Sagittarius woman are the perfect examples of how seemingly different people can be attracted. They are complete opposites to each other, as if from different poles, but perfectly complement each other. Virgo male is an analyst. He takes everything in life seriously, calculates all decisions, and even analyzes his feelings. Often he lacks the enthusiasm and energy to make decisions. He does not know how to live to the fullest and constantly drowns out his excessive joy. He should learn to relate easier to some things, and therefore the Sagittarius woman is perfect for him.

The Sagittarius woman is an endless source of energy, a perpetual motion machine for others. She will give a man hope and faith in himself, enthusiasm for new achievements, and motivation. A woman will teach a man to make life easier and with humor. He, in turn, will teach her how to be analytical at the right moments. Problems between partners can arise if a woman does not receive reciprocal energy, love, and emotions from a man. If a Virgo man tries to calm down a Sagittarius woman, then it will not end well. She does not like to be depressed and controlled.

Guy is Virgo, and Jacqui is Sagittarius. The couple was introduced by mutual friends in 2010 and soon began active communication by e-mail. Their next meeting took place a few months later. It was at Guy’s club, and the connection was so strong that she sat there until closing time and missed her train. She already then realized that Guy is her man and she wants children from him. Since then, they have not parted and tied the knot in 2015. The union welcomed three children.

Aaron is Virgo, and Lauren is Sagittarius. The two first met in 2009 at the Coachella Festival. However, their next meeting took place only a year later. When they kissed on the Ferris wheel, their romantic relationship began. On New Year’s Eve, Aaron proposed to Lauren in Paris. They got married in California in May 2013. They started a family full of love and care and later decided to share these wonderful feelings with another person. In 2018, their family expanded, and the couple welcomed their daughter. Aaron is famous for his work on Breaking Bad and what’s interesting is that they have a whole closet of things for their daughter in this series’s style.

Ginny is Sagittarius, and Bob is Virgo. The partners were introduced by a mutual friend, a comedian, in 1962 who arranged a blind date for them. At that time, Bob was building a career in Hollywood with all his might, and Ginny worked as a nanny for his friend. This friend, Buddy, was a great matchmaker, as these two really fit together perfectly. They started dating and got married a year later. In their union, they had four children. Bob once said that the secret of their almost 60-year marriage is in laughter and humor because, without this, it is difficult to imagine marriage and cope with the trials of fate.

Holly is Sagittarius, and David is Virgo. The partners met on the set of the cult mystical series Charmed. Holly and David started dating around 2003, and after a year of relationship, they decided to get married. The wedding took place in February 2004, and it seemed to them that it was forever. The partners have three children together. In 2011, Holly filed for divorce from her husband, citing irreconcilable differences. As she says, not everything was smooth for a long time in their relationship, and they were unstable. They did not have a marriage contract, and she only demanded joint custody of young children.

Christina is Sagittarius, and Johnathon is Virgo. The couple met in 1997, and it is worth noting that for Christina, it was love at first sight. She immediately felt an incredible connection with this man. They dated for four years before getting married and got married in 2001. However, in 2005, the couple announced their separation and filed for divorce. Their decision was absolutely mutual. The divorce ended in 2007. Johnathon proved to be a real man at this difficult time for their couple. He constantly talked about how much he loves and supports her and did not stop supporting her when she got married once again.