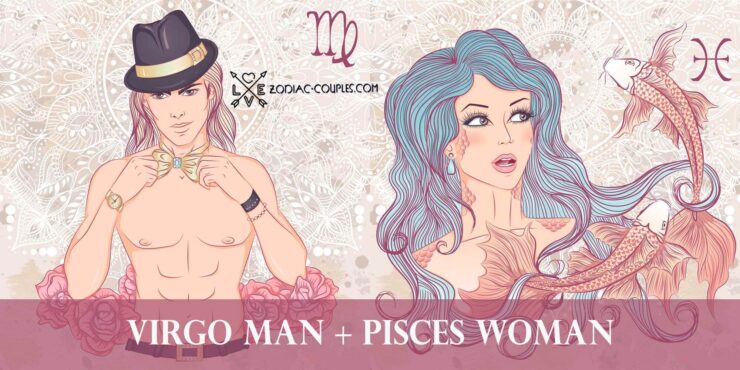 The Virgo man and the Pisces woman have every chance to build a reliable relationship. Reliable, but not quiet or calm. A woman accepts a man’s shortcomings but cannot stand his seriousness. She will look closely at him and try not to let him get too close since his rationality in everything seems boring to her. Virgo thinks through all their decisions, weighs the pros and cons, and does not take risks. He strives for calmness, and calmness for him is stability in his personal and professional life. Although a woman appreciates his reliability, it seems that a man sometimes needs to release his emotions and not be so shy. The Pisces sign avoids routine, seeks impressions, and surrounds herself with interesting people.

Virgo man should also learn to accept a partner. He does not understand her dreaminess and expressiveness. He wants her to think rationally more often, but the lady prefers a fantasy world. The Pisces woman constantly needs to be in a state of love, for this man needs to learn how to create a romantic mood.

The union of a Virgo man and a Pisces woman can withstand all difficulties, provided strong love between partners. Otherwise, they may part, as love and bright chemistry can quickly pass, and then quarrels and disagreements begin in the couple, and they separate even after long years together.

Olivia is Pisces, and Jason is Virgo. The couple met in the fall of 2011. Jason then attracted Olivia, but he did nothing. Then Olivia took the initiative and gave him her phone number through a friend. They started dating the same year, and the couple got engaged in 2012. The union has two children and they never got married. Olivia said that they were united by children and did not need an official marriage to confirm their feelings. However, in early 2020, the two announced their separation. They continued parenting together and remained in a good relationship.

Martin is Virgo, and Amanda is Pisces. The partners met in 2000 on the filming of the television movie Men Only. In 2001, they began their long-term relationship. The couple greeted their two children together, and since 2010, Martin’s career has begun to develop. And after his role in The Hobbit, he received many overseas contracts and was constantly absent from home. This negatively affected their relationship, and even though Amanda worked with him in Sherlock in 2014, it did not save their relationship. In 2016, the couple announced their separation. Amanda took this period hard and remembered it with sorrow.

Richard is Virgo, and Cindy is Pisces. They met in 1988 in the backyard of famed photographer Herb Ritts during a barbecue. The couple later began dating and appearing on the red carpet together. In 1991, Cindy and Richard decided that it would be nice to get married and did it in Las Vegas. But the sudden marriage did not succeed, and in 1995 they decided to divorce and announced the separation. The media and the public wondered for a long time about the reason for their divorce and believed that it was a PR move, but Cindy said that they could not cope with the age difference, which was almost 20 years.

David is Virgo, and Leigh is Pisces. The partners met on the plane, and in 1998 they decided to get married. The couple had five children and were married for over 20 years until David filed for divorce from Leigh in 2020, indicating that the couple split in 2019. Although David did not comment or publicize it, Leigh was the first to break the news on their social networks. The couple did not disclose the reasons for the divorce.