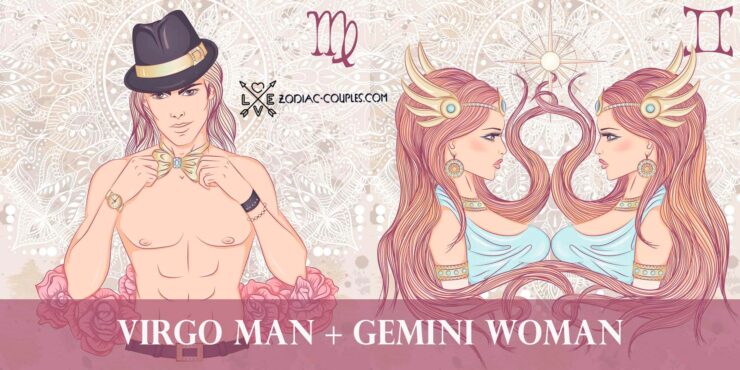 The union of a Virgo man and a Gemini woman is a connection of two opposites, which would seem completely incompatible. However, these two manage to find common topics from the first minutes of their acquaintance. They have a special connection – intellectual. Society will be surprised by how people with completely different ideas about life, hobbies, and lifestyles could meet and find each other. Still, these two manage to find a compromise.

The Virgo man and the Gemini woman will have conflicts. A woman is not constant, impulsive, too sociable, which will cause jealousy in her partner. She constantly has many ideas that a man is in no hurry to implement, as he finds them irrational.

Most likely, the relationship of the zodiac signs will begin with friendship. But a strong, stable, and happy marriage is possible only if you have strong feelings for each other and a desire to negotiate. The Virgo man loves to criticize, and he needs to learn to accept his woman as she is and not try to fix her; otherwise, rebellion is assured to him.

Heidi is Gemini, and Tom is Virgo. Heidi once hosted Germany’s Next Top Model. She and Tom had a mutual friend who worked on the same show and introduced them. The partners have an unusual age difference because she is 16 years older than him. It seems that both are not hindered by this difference; only the public constantly reminds of it. They got engaged in 2018 on Christmas Eve and got married in early 2019. They do not have children together, but Heidi has four children from a previous relationship. Tom managed to get a good connection with all of them.

Tim is Virgo, and Helena is Gemini. The partners met in 2001 while filming Planet of the Apes. He is an eminent director and has repeatedly shot her in his films. The couple began dating not long after they met. They have two children together. Helena talked about her struggle with infertility for a couple of years, and they could not conceive a child. The partners were not married, but they were considered a real family. Their relationship lasted 13 years until, in 2014, they decided to break up peacefully.

Hugh is Virgo, and Elizabeth is Gemini. The two first met in 1987 on the set of the movie Remando al Viento. Then they started dating. Hugh and Elizabeth have become one of the most influential in Hollywood. They often appeared together at events, were the idols of youth. However, their union’s authority collapsed after a scandal when Hugh was arrested in 1995 for indecent behavior on the street with a prostitute. It would seem that this could be the moment of their split and parting, but no. Elizabeth supported Hugh in every possible way and even accompanied him to the premiere of the film Nine Months. They decided to break up in 2000, by mutual agreement, when they realized that their relationship no longer worked. The partners remained in close relations, and now their connection looks like a brother and sister.

Ben is Virgo, and Morena is Gemini. The couple met while working on the film Gotham in 2014. At the time, Morena was still married. However, her ex-husband filed for divorce in 2015, which was finalized in 2016. At that time, she was already pregnant with Ben’s child, who was born just in time the divorce was finalized. In late 2016, Morena and Ben got engaged and got married 2017 in New York. Their family is full of love, and in 2021 they welcomed their second child together. Morena also has a child from a previous marriage.

David is Virgo, and Courteney is Gemini. They met in 1996 on the set of Scream. They both loved and hated each other during the filming of the second part in 1997 until they started dating. In 1998, David proposed to Courteney, and the partners tied the knot a year later. As a couple, they said that this was a union of two opposites, which at first were attracted, and later they had problems with it. The couple has a daughter together. Although they initially married with the idea that this was a permanent thing and did not intend to divorce, in 2010, the couple announced their separation. Courteney no longer wanted to be a “mom” for David, and she did not receive the support she needed from him. They were also complete opposites, she is an introvert, and he is sociable and preferred to spend time in different ways.

Carrie is Gemini, and Michael is Virgo. They met in 1994 on the set of Hamlet. Literally, a month later, they fell in love and started dating. Before the wedding in 1998, the union lived at a distance but passed this test perfectly. The couple does not have children together, so in 2010 they got a dog. They also fruitfully collaborated professionally and enjoyed it. It seems that everything is fine with the union, and there are many years of marriage ahead of them.

Jared is Virgo, and Allegra is Gemini. The partners met in 2009 at a comedy club where their mutual friend performed, and not long after that, their romantic relationship began. In the summer of 2013, Jared proposed to Allegra on a beach in Malibu, and they were married by the end of the year. The couple is still happily married to this day. Allegra is a companion and advisor to her husband. She supports him in his career and guides him. We wish them all the best.