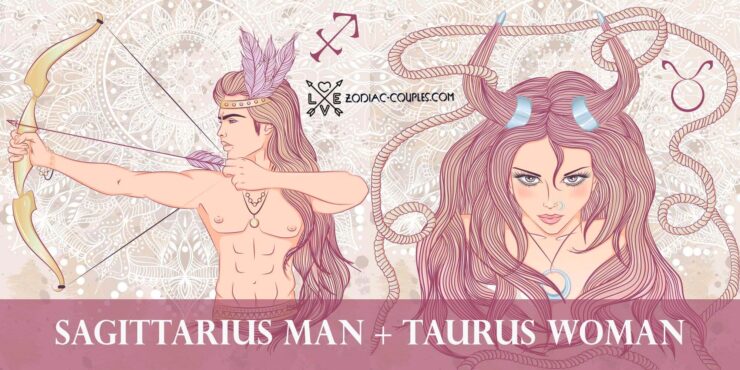 The Taurus woman from the first meeting attracts the attention of the Sagittarius man. Her adherence to principles, manners, and sincerity make him fall in love. She respects men, forgives a lot, and always finds excuses for them. However, it takes time for a woman to start trusting a man. His dedication can be envied, so he easily wins her heart. The Sagittarius man is very sociable, positive, and easily disposes of people.

The Sagittarius man and the Taurus woman have a chance to build a relationship overcoming difficulties. She is looking for stability in a man, reliability, and wants to build a family. A man does not make such plans and does not like when his freedom is limited. He wants to spend time actively and is constantly looking for new experiences. Here, the zodiac signs have a conflict of interest because they have completely different needs for love and relationships. They will overcome this subject to strong feelings for each other, but it won’t be easy since both will have to go against themselves.

Nikki is Taurus, and Ian is Sagittarius. The couple started dating in 2014, and it became official in August. After just a couple of weeks, they started living together and got a horse, and after half a year, the partners got engaged. In April 2015, Nikki and Ian got married. Before they started dating, the couple had been friends for almost nine years, which helped them get closer and build strong love relationships. In 2017, the couple announced Nikki’s pregnancy, which they hid for six months, as they wanted to enjoy the moment and leave it only for the two of them. Now they are happy parents.

Cher is Taurus, and Gregg was Sagittarius. The couple met in 1975 behind the scenes of his solo show. Then she was on a date with David Geffin, but that did not stop Gregg. He took her number, called the next day, and asked her out on a date. On the first date, he passed out from heroin, but she went on a second date with him despite this. After half a year, the couple got married in Las Vegas. Nine days later, she filed for divorce due to his strong drug addiction, but he managed to get her back. The couple had a son, and they released a music disc together. However, Cher did not abandon the thought of his addiction. In 1979, they decided to divorce, but she still has fond memories of marrying him.

Kelly is Taurus, and Brandon is Sagittarius. Their bond began in 2012 during a meeting at Super Bowl XLVI, where she performed. They had already begun to flirt, and ten months later, he proposed to her. The couple tied the knot in October 2013. They had two children together in the marriage, and Brandon has two children from a previous marriage. Their family was happy, and Brandon was a caring husband. However, in 2020, Kelly filed for divorce, citing irreconcilable differences and asking for joint custody of the two children. Children are a priority for the couple.

Adele is Taurus and Rich is Sagittarius. After divorce from her husband (who was Aries by the way) Adele started dating sports agent Rich Paul in 2021. They met each other earlier at a party and were spotted together frequently at NBA games since 2021.