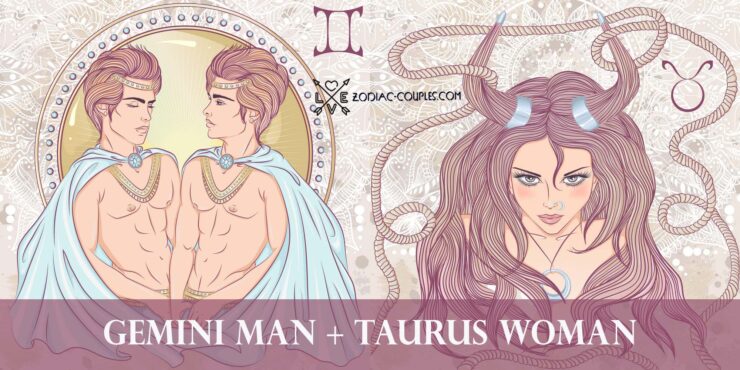 The union of a Taurus woman and a Gemini man is based on compromises. Taurus woman will not forgive and will not forget any criticism said by a man, and any spark of a quarrel ignites the flame of anger in her. But it is worth saying that she really loves attention, love, care, and tenderness. With the proper communication and respect of personal boundaries, signs will be able to build good loving relationships and a long, happy marriage.

Their opposite personality traits are the stumbling blocks to their long relationship. The Taurus woman is very calm, stable, loves order, and knows exactly what she wants and achieves it. Only anxiety and chaos, which Gemini men love so much, can set her off. Partners should agree at the very beginning of solving such problems, while there is no burden of responsibility and children.

It may be challenging for a Taurus woman to adapt to Gemini’s life rhythm, and it is difficult for Gemini to understand why their woman is so slow. She may get tired of constant events and people; haste will exhaust her. Overcoming these obstacles will be very difficult, and few couples will succeed. But those who will be able to make compromises will be rewarded. To come to an agreement, a couple needs some common cause, some unifying goal. Partners will understand that they have every chance to achieve the goal, as they are a good team.

Alicja is Taurus, and Colin is Gemini. The couple met on the Ondine set in 2008. In their relationship, they have a son together named Henry Tadeusz. Unfortunately, their union was not destined to last long. In 2010 the couple broke up, and Alicja officially confirmed the split up in early 2011. It was a sudden and intense love that ended just as quickly. After breaking up, Alicja speaks of her former partner only in a positive way, and it is known that Colin continues to take care of her and their son and flew to Poland a couple of times, where the mother of his child lives.

Liam is Gemini, and Natasha was Taurus. The couple met in 1993 on a Broadway rendition of Anna Christie and got married in 1994. They have two children together. Their marriage lasted for 15 years till the tragic day of Natasha Richardson’s death. The accident happened when Natasha went to the mountains for ski lessons for beginners and fell unsuccessfully. The doctors let her go, but right away in the room, she felt bad. Her condition worsened very quickly, and eventually, the doctors pronounced her brain dead. Natasha and Liam agreed that if one of them will be in such a state, the partner should refuse life support.

Liam remained a single father. He was madly in love with his wife and continues to love to this day. His only salvation from grief is work. The years after his wife’s death were the most productive in his filmography.

Amber is Taurus, and Johnny is Gemini. The couple met on The Rum Diary in 2009 and three years later in early 2012 started dating. In 2014 there was an engagement ring on Heard’s finger, and in 2015 the two got married.

It could be a tale of a long and happy life, but in 2018 there was a point of no return – Heard filed for divorce and accused Depp of physical abuse. Next year divorce was finalized, but one year later, Heard again wrote an op-ed saying she was abused. Depp sued her for defamation, and this chain of legal proceedings is not finished yet.

The royal family seems like a mystery, but they lived like an ordinary couple behind the palace’s doors. Dinner in front of the TV was one of their favorite pastimes. For 73 years, the couple was side by side, and on April 9, 2021, Philip passed away at the age of 99.

Kendrick is Gemini, and Whitney is Taurus. The couple started their relationship when they were attending Centennial High School in Compton in California, and in 2015 got engaged. In 2019 they welcomed their first child. Kendrick keeps his life private, and the press can only guess about the details and marriage.

Jon is Gemini, and Barbra is Taurus. The couple met on the For Pete’s Sake set. They started their relationship in 1973 when he was married to his previous wife. They were together till 1982. During this time, they shot the successful film Star Is Born, where Barbra played, and he directed. Their romance ended. However, many years later, John declared that she was the love of his life.

Other Taurus and Gemini famous couples