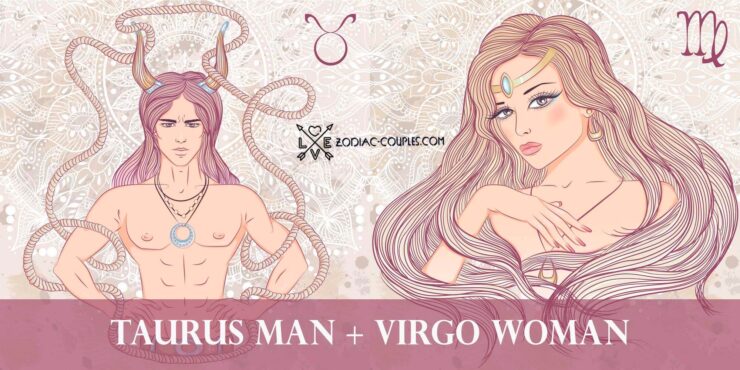 The Taurus man and the Virgo woman make up an excellent tandem. Their union will be strong, stable, and calm. However, they are attracted to each other, not from the first meeting, and it will take time to see each other as a life partner. The man will have to compete for the woman’s attention. He will court beautifully, which will certainly make her feel warm.

Taurus man and Virgo woman are both zodiac signs belonging to the element of the earth. This speaks of their common outlook on life as well as a similar character. They do not like excessive emotionality, will not sacrifice comfort and love personal space. Their relationship will not be bright and passionate; they will be calm and long. However, problems in a couple can still arise due to a lack of emotion. Partners are reluctant to show their feelings, which can negatively affect their connection. Both zodiac signs should be more open in relationships.

Daniel is Taurus, and Rebecca is Virgo. They met while working on a film adaptation of The Crucible play. The couple started dating in 1996, and it took them only a few months to realize that they were created for each other and get married. The pair later expanded their family and welcomed their two sons. Daniel has a son from a previous relationship. Their union is now 25 years old, and the secret of their strong marriage is that they are honest with each other and go through all the ups and downs together.

Dwayne is Taurus, and Lauren is Virgo. The couple met when Dwayne was filming The Game Plan in 2006. A year later, they began dating, and their wonderful romance began. In 2015, the two welcomed their first child, and three years later, they had their second child. Johnson supported Lauren and helped her in every possible way with the children. In 2019, the couple finally got married after years of relationship. In 2020, lockdown brought the couple closer, and the time spent together was good for them. However, the whole family later tested positive for Covid-19. Fortunately, everyone recovered and endured the disease well.

Jason is Taurus, and Beth is Virgo. The couple were not married; however, they were in a relationship from 2001 to 2007. During their long union, the two greeted their first child. At some point in their relationship, the couple even got engaged and made plans for a future wedding. However, after seven years of their unofficial family, they decided to split up. Now they each went their own way and are building a new life.

Salvador was Taurus, and Gala was Virgo. They met during a trip to Cadaques. Gala was still married at that time and had a daughter, but she later divorced. An affair with Dali turned her head spinning, and she plunged into it completely. Gala took her daughter to her grandmother. They got married in 1934. This woman managed to influence the work of Dali significantly. She was his muse, and he painted pictures from her. She negotiated with the galleries and became his agent. However, their relationship was not standard. She was very sexually active with many young lovers, and Dali encouraged this since he was impotent himself and was not interested in female physiology. Gala spent a significant part of the money on her lovers. In 1968, Salvador presented her with a castle, which he could not visit without her knowledge. When she was 80, she had a lover who was only 20. She died in 1982 after a complication of the flu, and he died seven years later.

Will Arnett and Amy Poehler 💔

Will is Taurus, and Amy is Virgo. The couple met in 1996. A bond immediately formed between them which they could not resist and soon began to meet. Their relationship escalated into marriage in 2003. The union welcomed two children in 2008 and 2010. However, in 2012, the couple announced their separation, and in 2016 they divorced. The reason for their divorce was that their relationship mutated from love to friendship. There was no more passion between them, everything became boring and monotonous, and the partners decided to move on. They stayed on good terms. Will bothered that Amy had a huge army of fans, and they all sided with her as if it were some game. The people did not consider the fact that there were no guilty parties in the division, and it was a mutual decision.

Vincent is Taurus, and Alexis is Virgo. The two met on the set of Mad Men in 2012. They lead a very private life and do not disclose their relationship. The couple began dating after filming ended and got engaged in 2013. A year later, they tied the knot in a secret ceremony in California. In 2015, they welcomed their first child. The union, to this day, does not disclose the details of their personal life. However, their marriage and family are still strong, and they raise a child together.

Aaron was Taurus, and Candy is Virgo. The partners met around 1965. It was at the Daisy nightclub in Beverly Hills, where they went on dates with various companions. However, Aaron decided to invite Candy for a dance, then another one, and after the eighth dance, her companion took his coat and said that they were leaving. However, Aaron has already managed to fall in love and said that he will marry Candy. The difference in 20 years did not bother them. He was a talent and celebrity at the time. The couple got married in 1968 and welcomed two children. They were together until he died in 2006.

Jerry is Taurus, and Jessica is Virgo. The couple met in 1998 when Jessica just got married and returned from her honeymoon. She had problems in her marriage. While at the gym, Jerry noticed that she was sad and decided to cheer her up. A few months later, Jessica’s husband filed for divorce, and she dated Jerry until 1999 when they got married. The married couple greeted their three children together. Although their relationship began with a scandal over Jessica’s short marriage and her affair with Jerry, the 20 years they have already spent happily together proves that everything happened exactly as it should.

Other Taurus and Virgo celebrity couples