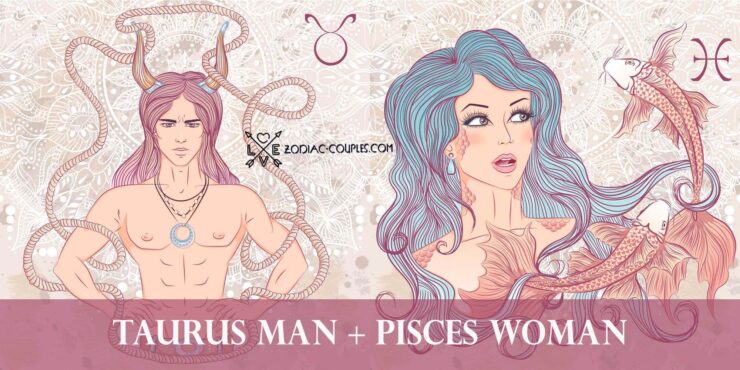 A Taurus man and a Pisces woman can make a strong tandem. These signs of the zodiac belong to the elements of earth and water. Initially, they may have different interests, but they have common basic values. The Taurus man and the Pisces woman are very sentimental persons. Their relationship will be deep, gentle, and romantic. For both signs, peace, and comfort in everything is a priority.

These signs of the zodiac can feel a strong attraction from the first meeting. At the beginning of their relationship, both partners feel a strong connection, like they have found the very person and their soul mate. However, both partners’ calm can play a cruel joke with them since this calmness will change to boredom. Partners will begin to lose interest in each other and drift away.

A Taurus man does not know how to understand his beloved’s emotional state and does not feel her need. The Pisces woman prefers to leave everything to chance. She wants a man to lead the process in a relationship, but he is not capable of it. If partners do not show attention and sensitivity to each other, their relationship and marriage will end quickly.

Cindy is Pisces, and Rande is Taurus. The couple met at Cindy’s agent wedding when she was still married, and Rande had a girlfriend. They became friends, and after Cindy’s divorce from her ex-husband in 1995 began dating. The partners got married in May 1998 on Paradise Island in the Bahamas. In marriage, they greeted two children who followed in their mother’s footsteps and became fashion models. In 2021, the couple delighted the press with such a rare joint photo. Even after more than 20 years of marriage, they look like newlywed lovers.

Mark is Taurus, and Priscilla is Pisces. The couple met long before Mark became a billionaire. It happened in 2003 at a party when both were students at Harvard when they started dating. In 2012, the couple bonded in a backyard in Palo Alto. The couple has two children. There is an amazing bond between partners that has lasted for many years. Chan fell in love with him prior to worldwide fame and continues to love him just as sincerely. Mark’s wife is his pride, and they often share family photos on social networks.

Eva is Pisces, and Tony is Taurus. The couple met in 2004, but they hid their relationship for another year and confirmed their relationship only in August 2005. In 2006, the two broke up for a short time, but it did them good, and at the end of the year, they announced their engagement. The wedding took place a year later in Paris. Their marriage was three years old when Eva filed for divorce in 2010, citing irreconcilable differences. The reason for their divorce was the sexual correspondence between her husband and his friend’s wife. Eva was devastated, and Tony faced public censure.

Benoît is Taurus, and Juliette is Pisces. The partners starred together in the film Les Enfants du Siècle and began dating during this project’s filming in 1998. As a result of their relationship, was born a daughter Hannah, whose mother proudly announced her acting debut recently on her Instagram. The relationship between the partners ended in 2003. They were not married. Presently everyone has their own personal life, but they are united by parenting over a promising young actress.

Talia is Pisces, and George is Taurus. The couple was married from 1989 to 1993. The divorce process lasted a surprisingly long time, as long as 25 months. There was a true struggle between the partners for custody of the pig. The couple had no children. There were actually many reasons for their separation. First of all, the partners differed in their priorities. Talia wanted a quiet family life while Clooney was fighting for his career. Talia is from a respectable family in Hollywood, so she had no career problems, and Clooney had to fight for a place in the sun. Both partners also admit that they just got married at the wrong time.

Other famous Taurus and Pisces couples