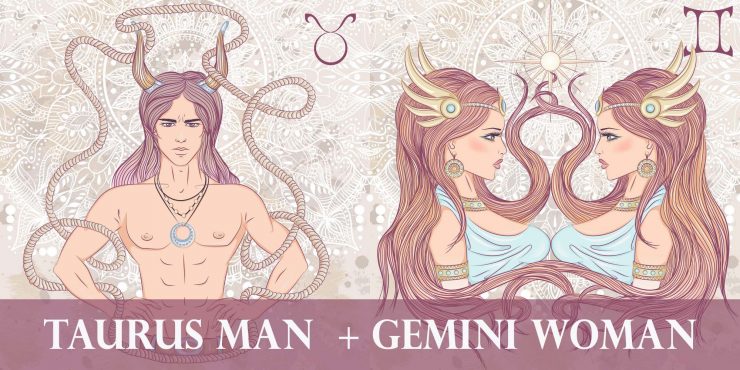 Their relationship is a clear example of a very interesting relationship, in which opposites first attract, and then either rub in or repel. The Taurus man is earthly, he is unhurried, methodical, and the Gemini woman, ruled by air, is very easy-going, fast and impetuous. The Taurus man is very sensual and loves touch. While very different, they are nevertheless often quite happily married. There is a mutual attraction between them, they are interesting to each other. In this couple, there may be deep mutual respect, the ability to take care of the partner’s boundaries. If they try, they will be able, without breaking themselves, to adjust to their partner and go through life shoulder to shoulder, complementing their soul mate with unique qualities.

The main thing in the relationship of these signs is to learn mutual support and understanding. It is also important to be able to find compromises and not think only about your own desires. Then the love relationship will be quite promising and strong.

The period of love affairs for Jamie ended in 2007 when he met Amelia. They have been dating for a long time – five years, not one of his romances lasted so long. So it is not surprising that in 2013 the lovers got married.

Despite all their publicity, the couple very skillfully hid their relationship from prying eyes. Even now, when Jamie has become a world-class star, the story of his acquaintance with Amelia remains a secret. And their wedding, which took place in April 2013 in the English county of Somerset, was not like marriage of two celebrities, everything was limited to a modest ceremony for the closest friends and relatives.

Since then they have had 3 kids and keep their personal life low, away from media. But in Jamie’s interviews we always can read somethings nice about his wife, marriage and their love.

Enrique is Taurus and Anna is Gemini. In 2001 Anna took part in his music video – and you if ever saw it (“Escape”) you might have seen the chemistry between them.

Both of them had numerous romantic affairs before they started dating, and all these years rumours about whether they got married or still together were swirling. But both Anna and Enrique stated that marriage is not important for them – commitment and loyalty are.

In 2017 they welcomed twins and in 2020 a girl. It seems that those two are perfectly fine together.

Andre is Taurus and Steffi is Gemini. It was 1999 when they started dating, although Andre said, that he liked her long before. In 2001 they got married. Today they have two children and are very happy being retired from the most successful careers and fame. Andre says that it’s because they are both individuals who respect and love each other, but it’s also important to meet the right person.

💔 And it’s where we should say, that Andre was married to another Gemini – Brooke Shields. But this marriage ended in 2 years, apparently because of few reasons: Andre said that it was a complicated period of his life when he didn’t really know himself, he was addicted and both he and Brooke worked too much.

Other famous Gemini and Taurus couples

There are few other celebrities that we know of: